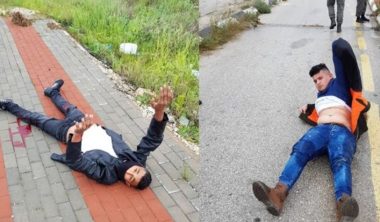 Israeli soldiers shot, Tuesday, two Palestinians near Za’tara military roadblock, south of the northern West Bank city of Nablus, after they reportedly attempted to stab them, and refused to allow Red Crescent medics to provide them with the needed medical attention.

Update:  The Palestinian Health Ministry has reported that the two injured Palestinians are children, identified as Mohammad Farhan Mohammad, 14, and Ahmad Sa’id Zazouq, 14, from the al-Jadeeda village, south of Jenin.

Both were shot with live rounds in their legs and remained bleeding on the ground after the soldiers prevented Palestinian Red Crescent medics from approaching them.

The soldiers later called for an Israeli ambulance, and moved them to a hospital, while the extent of their injuries remained unknown.

Media sources in Nablus said the two Palestinians were shot in the lower extremities, and remained bleeding on the ground until an Israeli ambulance was called to the scene, even though Palestinian medics were there, but the soldiers refused to allow them to approach the wounded.

Israeli sources claimed that the two Palestinians attempted to stab the soldiers at the military roadblock but were shot before reaching them.

The soldiers then closed Za’tara roadblock, while dozens of units were deployed in the area and around it.

After the alleged stabbing attempt, the head of the so-called Regional Council of Settlements in northern West Bank, Yossi Dagan, said that “terrorism will not deter Israel – we will be and continue to expand,” and demanded Israel to respond to this incident by “boosting settlement constructions” in the occupied West Bank, including occupied Jerusalem.