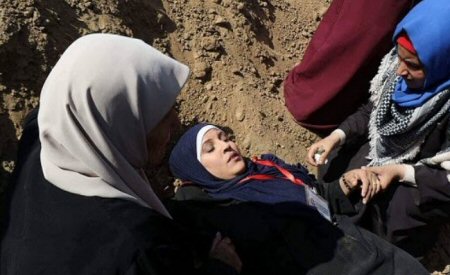 Photo: Journalist Madeline Al-Aqraa after she was wounded in the field, in the town of Khuza’a, east of Khan Younis.

The attacks against media freedoms in Palestine continued to rise during June of 2018, and have experienced a new upsurge. Totalling 62 attacks, they reflect an increase of five cases, as opposed to compromises observed during May.

June witnessed 33 violations from Palestinian authorities, and 29 were committed by Israeli occupation forces, in the occupied West Bank and Gaza Strip. It should be noted that the number of Palestinian violations almost rarely exceeds the number Israeli violations, PNN reported for MADA.

During June, the Israeli occupation committed 29 assaults, most of which were classified as serious or even sexual assaults on media freedoms and journalists. A number of these violations fall under the category of collective and “combined assaults”, which affected more than one journalist, with more than one type of assault being committed in the same moment.

Throughout he month, Israel continued to target journalists with live ammunition. It is worth noting that three journalists were injured by live bullets, namely: Mohammad Abdelraziq Albaba, a photographer at Agence France-Presse AFP, who was injured with gunshot in his foot while covering the events of the Great March of Return taking place in Abu Safiya, east of Jabalia refugee camp. A photographer fromTurkish Agency “Anatolia”, Ali Hassan Musa Jadallah, who was shot in the palm of his right hand while covering the march to east of Khan Younis, and freelance journalist, Haitham Adnan Madoukh (working for the local Sky Press Agency), who was wounded by a gunshot through his left leg, below the knee, as he was covering the events of the march in the east of Gaza, which caused him a severe laceration in the bones. Furthermore, two other journalists were injured with gas bombs fired directly at them, while a female journalist was injured with a rubber-coated bullet, in addition to the suffocation of dozens of journalists, which resulted in four cases of fainting and severe respiratory distress, and required immediate treatment and hospitalization at health centers, for various periods of time.

Additionally, the Israeli army and occupation intelligence services detained a total of five journalists, in June. An Israeli court prevented the Director of Elia for Media, Mr. Ahmad Hussein Al Safadi, from attending or covering any public event in Jerusalem for one month, after being detained by Israeli police.

Israeli police and  intelligence went so far as to raid an Iftar ceremony organized by the Chamber of Commerce, for the journalists, at the Ambassador Hotel in Jerusalem, and dispersed 30 journalists who attended the ceremony.

Palestinian violations have reportedly witnessed a remarkable rise, jumping from four violations, in May, to at least 33, during June, with 10 occurring in the Gaza Strip and 23 in the West Bank.

The largest portion of these violations, which took place during June, are classified as serious violations. On top of this were the widespread violations committed by Palestinian security agents dressed in civilian clothes, against journalists who were covering a peaceful sit-in, in downtown Ramallah, on 13 June, 2018. This is in addition to violations similar in essence and form committed, by members of Hamas and security agents in civilian clothes, against both male and female journalists who were covering the sit-in, which was taking place at Al-Saraya Square, downtown Gaza, on 18 June, 2018. This included physical assaults, using sticks and hands, against a number of journalists, as well as the seizure of some tools and the destruction others, deleting media recorded by the journalists, in addition to preventing them from media coverage. This is also in addition to the widespread and collective assaults which affected those taking part in both sit-ins (Ramallah and Gaza). It should be noted that these sit-ins were taking place to protest against the failure to pay the salaries of Palestinian Authority staff in the Gaza Strip.