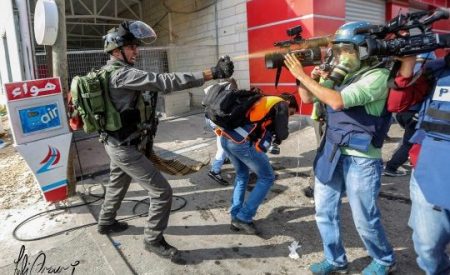 MADA center will reportedly serve to push towards the establishment and success of forming such a court that will shed light on the impunity of perpetrators against journalists from accountability on an international scale, in addition to prosecuting and punishing them, thus minimizing the escalation of violations and crimes against journalists and media freedoms.

Moreover, according to the PNN, MADA will submit a detailed proposal, in this regard: for the formation of a mock international tribunal, for the global network for defending and promoting free expression “IFEX” (of which MADA is a member), and to several regional and international parties, in order to both approve this proposal and begin applying it, after agreeing on all details related to forming similar courts.

The Press Emblem Campaign (PEC), located in Geneva, stressed that media workers face increasing risks in a number of conflict zones. Since the beginning of 2016, until the end of October, 105 journalists were killed in 25 countries (110 for the same period last year), while Afghanistan, Syria, Iraq and Mexico counted the most fatalities so far (more than 10 in each country).

On the other hand, Israeli occupation forces have murdered 41 journalists and media workers (in the West Bank and Gaza Strip), since the beginning of the year 2000, including one journalist this year. Meanwhile, the total number of violations recorded this year (monitored by MADA) in Palestine, since the beginning of 2016 to the end of October, stands at 326 violations (207 committed by Israeli parties, and 119 by Palestinian parties), in the West Bank and Gaza Strip.