Many Palestinians Suffer The Effects Of Teargas Inhalation Near Jenin 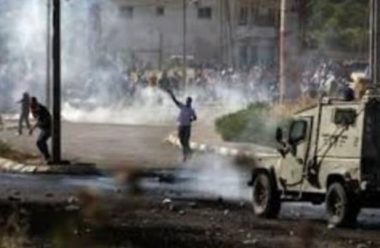 Media sources in Jenin said the soldiers invaded the village, which  is surrounded by the Annexation Wall and colonies, and installed a military roadblock, in the downtown area.

The soldiers stopped and searched dozens of cars, and harassed many Palestinians while inspecting their IDs and searching their vehicles.

The invasion led to limited clashes between the soldiers and local youngsters, while the army fired many gas bombs at them, and at a few surrounding homes, causing scores of residents to suffer the effects of teargas inhalation.

Among the wounded Palestinians are two women, identified as Howeida Saeb al-Ahmad and Khitam Sbeihat, who were moved to Khalil Suleiman governmental hospital for further treatment, after suffocating from the gas fired by the army.