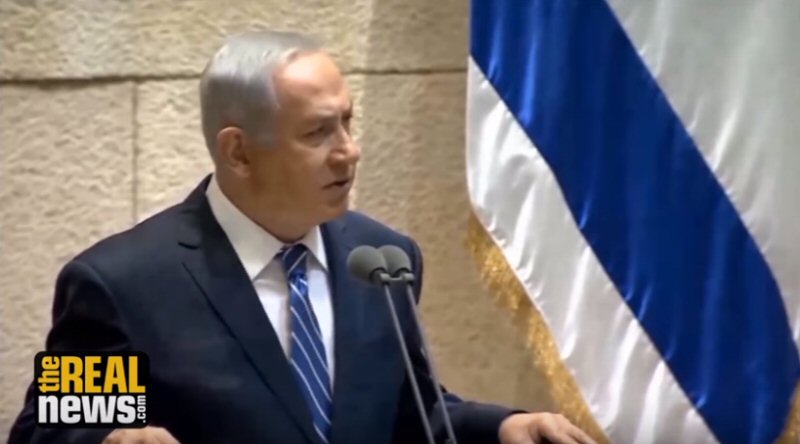 Reporting from the Gaza Strip, journalist and best-selling author Max Blumenthal says that Netanyahu’s domestic corruption case has not even registered to a besieged Palestinian population under Israeli blockade.

Max Blumenthal is an award-winning journalist and bestselling author whose articles and video documentaries have appeared in The New York Times, The Los Angeles Times, The Daily Beast, The Nation, The Guardian, The Independent Film Channel, The Huffington Post, Salon.com, Al Jazeera English and many other publications. His most recent book is Goliath: Life and Loathing in Greater Israel. His other book, Republican Gomorrah: Inside The Movement That Shattered The Party, is a New York Times and Los Angeles Times bestseller. Max is co-host of the podcast Moderate Rebels.

BENJAMIN NETANYAHU: (Translator): After I read the recommendation report, I can say it is biased, extreme, full of holes, like Swiss cheese.

AARON MATÉ: The news that Israeli police have recommended bribery charges against Netanyahu has dominated headlines and threatened his political future, but as all of this unfolds, the crisis in the Gaza Strip remains ignored. On the same day as the Netanyahu corruption news broke, several major groups reported that 54 Palestinians died last year after Israel delayed or denied their request to leave the Gaza Strip for medical treatment. Israel approved just over half of all medical permit requests from Gaza in 2017, its lowest rate on record. The Israeli blockade of Gaza, coupled with the recent cut in US funding to Palestinian refugees, prompted a UN official to warn of what he called an epidemic deterioration.

SPEAKER: If you think of all of the constraints and sense of deprivation that faces the community, you have what our colleagues in the health sector in the Gaza Strip call an epidemic deterioration of psychosocial conditions.

AARON MATÉ: Joining me now from the Gaza Strip is Max Blumenthal, bestselling author, senior editor of the GrayZone Project here at The Real News. Max, welcome. You are in the Gaza Strip just as this news about charges against Netanyahu have broken over corruption. You’re visiting there, I believe, for the first time since the 2014 attack on Gaza that Netanyahu oversaw. I’m just wondering your thoughts on this news of potential charges against him in light of what you’re witnessing in Gaza right now.

MAX BLUMENTHAL: Well, I guess it’s impossible to address the charges or the police recommendation that Netanyahu be indicted in light of anything in Gaza. I guess, the first point I would make is that when the indictment recommendation came, and it’s just that, a recommendation, I was watching, I was scanning through Arabic media channels. It wasn’t even on the Arabic news channels. It wasn’t even mentioned there. It wasn’t in the news. No one was talking about it here in Gaza and when I would bring it up to people, they would say, “We want Netanyahu indicted for slaughtering our friends and families in 2014, not for accepting champagne and cigars from oligarchs who he was attempting to provide tax breaks for.” It’s treated with a collective shrug here.I spoke to Jamal Zahalka last week, who is a Palestinian member of the Israeli Knesset. He said getting Netanyahu on corruption charges and breach of trust is like nailing Al Capone for tax evasion. Basically, it evades the real issue of occupation, apartheid, and I guess you could call it disproportionate force against the civilian population of Gaza. So, that’s really the reaction from here.The reaction in Israel is entirely different. To put it as succinctly as possible, none of this means that Netanyahu’s government will fall. His government appears to be fairly stable because there’s no clear successor to him. There’s no politician who is nearly as popular as he is, even though he is maybe not that popular by historic standards for Israeli prime ministers. It’s up to to the attorney general, Avichai Mandelblit, to decide whether Netanyahu should actually go to trial, should be indicted.Mandelblit has ambitions to serve on the Israeli Supreme Court. So, he’s in a really politically tough situation. There have been protests for 60 weeks in the major cities of Israel, particularly Tel Aviv, which is the heart of the metropolitan, liberal, Ashkenazi elite of Israel. I wouldn’t say elite, but Ashkenazi middle class, but that traditionally doesn’t like the Likud Party. If you talk to the man in the street, Netanyahu still commands a good amount of support. Israel is a Likud state, and so I don’t think we’re looking at the downfall of Netanyahu right now.

AARON MATÉ: You’re back in Gaza after having visited there just following the Israeli attack in the summer of 2014. I believe, this is your first time back. What’s your impression upon visiting it now?

AARON MATÉ: Yeah, Max. You know, one thing I know about the Gaza Strip is that beach you were talking about on the Mediterranean Sea. That’s one of the few places in Gaza that have provided some measure of relief to people. They can go there and relax, and go in the sea, but that sewage situation you’re talking about, that seems to be impossible now, right?

MAX BLUMENTHAL: Yeah. I mean, you can’t go to the sea. You can’t go to the east beyond the buffer zone because you’ll get shot by a remote-controlled machine gun controlled by Israeli soldiers. You’re basically trapped. You’re trapped to the south by Egypt. You’re trapped on all sides. Of course, Israel controls the airspace. The walls are just closing in on Gaza, and then meanwhile the internal situation politically and economically has never been worse. There’s no clear path out of it. There’s no path out of this situation. No one sees a strategy or a means for alleviating this crisis. I guess, you could call it a catastrophe on top of another catastrophe.

AARON MATÉ: We’ll leave it there. Max Blumenthal, bestselling author, senior editor of the GrayZone Project here at The Real News, speaking to us from the Gaza Strip. Max, thank you.

MAX BLUMENTHAL: Thanks for having me.