Mayor of Bethlehem: PM Netanyahu’s Statement on Bethlehem and Palestinian Christians is Another Attempt at Distorting the Reality of Israeli Occupation 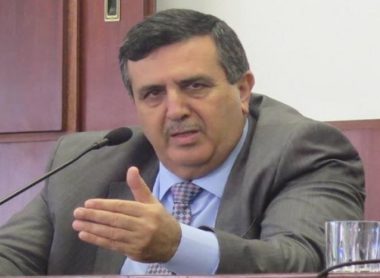 Mayor of Bethlehem, advocate Anton Salman said, in response to Sunday’s statements by Israeli prime minister Benjamin Netanyahu on Bethlehem and the situation of Palestinian Christians, that such a statement “is another Israeli attempt at distorting the reality of the Israeli occupation and particularly the effects that Israeli policies have had on the Palestinian Christian community since 1948.”

“If Mr. Netanyahu was concerned about the situation of Palestinian Christians, particularly in the Bethlehem area, he would return the 22,000 dunams of Bethlehem land illegally annexed to Israel for expansion of colonial settlements. He would dismantle the annexation wall that divides Bethlehem from Jerusalem, for the first time in 2000 years of Christianity, and would stop imposing restrictions to Palestinian movement, including the thousand of Palestinian Christians living in exile and whose return is impossible due to the Israeli control over the Palestinian population registry,” said the mayor in a statement issued by the Bethlehem municipality.

He continued, according to WAFA: “For example, in Jordan alone, a few kilometers away, there are at least 20,000 Palestinian Christians from the Bethlehem area that are denied family unification and even cannot enter the city, not even to celebrate Christmas, due to the Israeli military restrictions.

“We would like to remind Mr. Netanyahu that it was he who supported the building of one of the most damaging colonial-settlements that surround Bethlehem, Jabal Abu Ghneim (Har Homa), and that, in 2015, he declared that by doing so he is preventing the connection between Bethlehem and Jerusalem.”

There are over 100,000 Israeli settlers surrounding Bethlehem from all sides, reducing the area of Palestinian control over Bethlehem to less than 13% of the district, and making it impossible to plan for the future of our city, said the statement.

Furthermore, it was Mr. Netanyahu who voiced objection to declaring the Church of the Nativity and the Pilgrimage route as a World Heritage site and his policies of harassment were behind the decision of the churches to close the church of the Holy Sepulcher for three days in Jerusalem in objection to church taxation policy, added the statement.

“His comment was also full of historical inaccuracies. It is shameful that while calling himself a ‘protector of Christianity’, he would use Christians as a tool for his Islamophobic talking points. The decrease in percentage of Christians in Bethlehem, as well as in the rest of Palestine, was provoked with the Nakba of 1948 and ongoing due to Israel’s colonial plans and policies that started in 1967.”

He said that this was also the case in West Jerusalem, from where a large Palestinian Christian community was expelled by Israel from Ein Karem, Talbiya, Qatamon, and other places. From 31,000 Christians in 1948, Jerusalem only has around 12,000 Christians today.

“We would like to advise Mr. Netanyahu to stop using Christians as a tool to pinkwash the occupation. The best he could do for a future of peace and coexistence, where the Christian community would thrive again, it is to respect his obligations under international law, including Security council resolutions 478 on Jerusalem and 2334 on settlements, dismantling illegal colonial-settlements and the annexation wall surrounding Bethlehem, including in the Cremisan Valley, fully end the occupation of Palestine and allow for the return of our people to their city. It is not the Palestinian government that prevents their return Mr. Netanyahu; It is your government.”

He said: “I would like to use this occasion to call upon the heads of the churches in Jerusalem as well as to the Holy See to raise their voices against the use of religion for political purposes. It cannot be tolerated anymore that the bible is used wrongfully in order to justify crimes and violations that go against the teachings of values spread by our lord Jesus Christ.”