Miles of Smiles Convoy Heads Back to Gaza Next Month 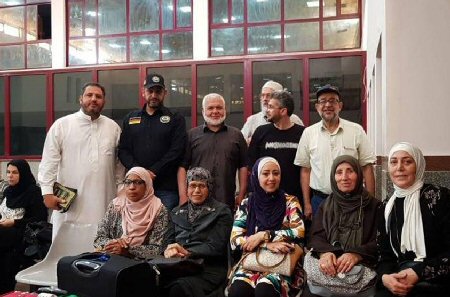 Dr. Essam Youssef, the Head of the Popular International Committee to Support Gaza, announced that new Miles of Smiles convoy is set to arrive in the Gaza Strip early next month.

Working as the coordinator of the series of convoys that first entered Gaza back in 2009, Youssef stated that Egyptian authorities have given permission for the group of humanitarian activists to enter the territory through Rafah crossing, reported Quds Press.

He asserted that the Gaza Strip is under an Israeli-led siege and economic sanctions, and that the people need a lot of humanitarian assistance. Also, the healthcare sector is in particular need of urgent support, he added.

The veteran Palestinian charity campaigner stressed that aid agencies in the Arab and Islamic countries should unite and prepare for the relief and solidarity convoy. He appealed to them to send donations for Miles of Smiles to take vital medicines and medical supplies into Gaza.

“We are looking to buy wheelchairs and other mobility aids for the many people who have lost limbs and been seriously wounded, during the Great March of Return protests,” Youssef pointed out.

“Furthermore, the sort of essential items that we all take for granted are missing in Gaza’s hospitals, including basic medical disposables such as antibiotics, antiseptics and sterile equipment to prevent infection. It is a catastrophic situation which we hope to alleviate as much as we can.”

The health sector in the Gaza Strip has deteriorated to the point of collapse as a result of the siege, now approaching its 13th year.

Incredibly, Days of Palestine further reports, the Miles of Smiles convoys were once lauded by Israeli forces for taking an apolitical position, with regard to their humanitarian efforts. “We are here to help anyone on the basis of their need,” explained Dr Essam Youssef. “Political, religious or other affiliation doesn’t enter the equation; just need.”