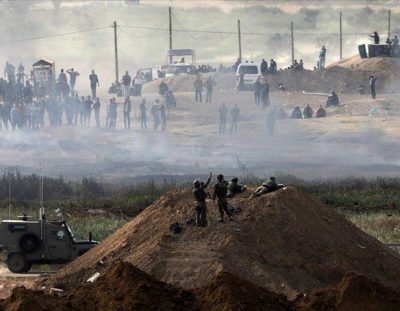 Fourteen Palestinians were shot, Wednesday, by Israeli forces, while drones dropped teargas canisters at those gathered at the border between the Gaza Strip and Israel, the Jerusalem Press reported.

According to the Palestinian Ministry of Health in Gaza, as of Wednesday evening 14 people were shot and wounded as they assembled east of Khan Younis, in the southern besieged Gaza Strip.

The Ministry added that 5 were shot with live rounds, suffering moderate injuries; 2 were shot with rubber-coated steel rounds; and 7 were struck with teargas canisters.

Quds Press’s correspondent said that the soldiers, stationed along the security fence stood behind earth mounds, far away from the protestors

Medical sources also stated that the numbers may not be conclusive, due to the continued shooting and evacuation of the injured to hospital.

Quds (Jerusalem) Press reported that thousands of Palestinians gathered at the mass rally, called for by different political factions in Gaza.

On Saturday, Israeli forces opened fire at protestors east of Gaza city injuring 41 people, while one soldier was injured by a Palestinian protestor with a handgun.