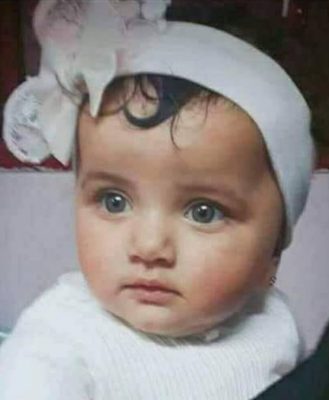 Updated: The Palestinian Health Ministry has confirmed that Israeli soldiers killed, Monday, 58 Palestinians, including six children and four officers of the Palestinian Ministry of Interior and National Security, in the Gaza Strip, and injured 2771.

Among the slain Palestinians are six children, including an infant, only eight months of age, identified as Laila al-Ghandour, who died from teargas inhalation due to the army’s use of high-velocity teargas bombs.

Among the wounded are 122 children, and 44 women, the Health Ministry added.

The Palestinian Health Ministry reports that 1,204 Palestinians were injured with live ammunition. 79 were shot in their necks, 161 in their arms, 62 in the back and chests, 52 in their stomachs, and 1055 in their lower limbs.
At least 203 of the injured were reported to be children, and 78 women.

Other injuries were as follows: three with rubber-coated steel bullets, 91 with shrapnel, 100 cuts and bruises and 737 suffered the effects of teargas inhalation.

The Ministry of Interior and National Security said the four slain officers were performing their duties and national services when the soldiers shot them dead.

The soldiers also caused damage to at least one ambulance and injured one medic and eleven journalists. In addition, the Health Ministry called on Egypt to urgently send emergency medical supplies and specialists, mainly surgeons, intensive care physicians,  anesthesia specialists, and to allow the transfer of a large number of the wounded to Egyptian hospitals, especially those indeed of urgent surgeries, since Gaza hospitals lack the needed supplies due to the siege on the coastal region.

The casualties that have been identified so far are: