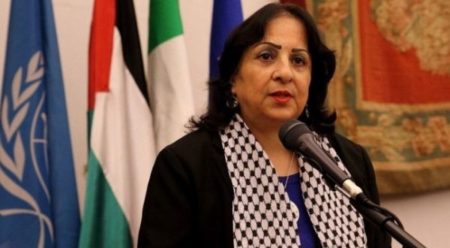 Palestinian Health Minister Mai al-Kaila has publicly warned of the consequences which will result from Israel’s power cuts in three Palestinian governorates, the impact on the lives of patients in specific, and all citizens in general, in addition to the effect on medicines and vaccines stored in refrigerators.

In a press statement, Saturday evening, the minister said that the power cuts will harm the patients and spoil medicines stored in the refrigerators of their homes.

In addition, it will impact all citizens, with regard to food, medicines and vaccines stored in home refrigerators and in health centers clinics.

Al-Kaileh stressed that any such power outages will likely lead to damaging effects on their potency, especially as these medicines are kept at low temperatures, including those which need to be permanently milled during the conservation period.

The minister pointed out that most vaccines are stored at a temperature between 2-8 degrees Celsius, and that there are a number of vaccines stored at much lower temperatures, thus binding their effectiveness.

Al-Kailed warned of this ‘dangerous step,’ Israel is taking, saying it is a form of collective punishment for all the Palestinian people, since authorities did not observe any charter, custom or international law, in the move.

The Jerusalem District Electricity Company (JDECO), which is the largest electricity provider in the West Bank, on September 16, announced that it received the third and final warning from the Israel Electricity Corporation (IEC), to settle its debt within three months.

JDECO receives 90% of its energy needs come from the IEC, according to the PNN.

Following the first warning, on August 19, JDECO took out a bank loan and paid 100 million Israeli shekels ($28.3 million) of the 1.3 billion shekels ($368 million) outstanding. However, the IEC has continued issuing threats.

This means that, due to the company’s failure to pay its accumulated debts, areas to which JDECO supplies electricity will start witnessing two hours of electricity cuts, starting September 22, based on a schedule.