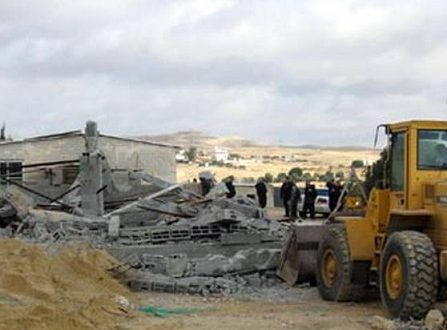 Israeli bulldozers, on Friday, demolished three houses belonging to Palestinian locals near the Negev desert, under the pretext of unlicensed construction.

Palestinian sources, according to the PNN, reported to Quds Press that the demolitions included a house in the village of Umm-Qabu, near Tall Al-Sabe village, as well as two others in the villages of Al-Atrash and Al-Sayyed, that are not recognised by Israeli occupation authorities.

An Arab deputy in the Israeli Knesset, Said Al-Kharoumi, claims that the demolition campaign is just one in a series of recent fierce campaigns that aim mainly at harassing citizens and forcing them out of the area.

Al-Kharoumi told Quds Press that Israeli authorities have been trying to impose forced solutions, demolitions and destruction on the inhabitants of Negev.

The Chairman of the Supreme Orientation Committee of the Arabs of Negev added, “We believe that this racist and unfair policy is going to fail in weakening our people in Negev, just like it failed in all of its previous attempts.”

In Ramallah, yesterday, Israeli occupation forces blew up the house of a Palestinian family in the village of Deir Abu Mishal, northwest of occupied Ramallah.

Nearby houses suffered damages and one of them was set on fire, as a result of the explosion. Fire trucks from the Palestinian Civil Defence were called to the scene, to control the fire and put out the flames.

The coordinator of the National Committee to Resist Settlements in Yattah said that the bulldozers have been working on razing Palestinian lands that belong to the Al-Hathalin and Abu Hmeid families, every morning, in order to expand the illegal settlement of Karmiel.

He added that many settlement outposts are multiplying their construction efforts.