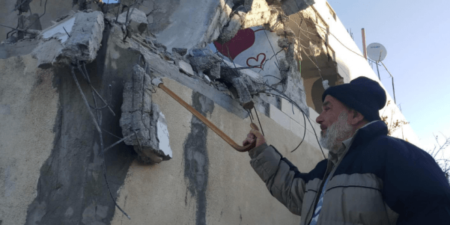 Following the demolition, confronatations erupted between Palestinians and Israeli troops, who used live and rubber-coated metal bullets and tear gas canisters to disperse the protesters.

Tel Aviv accuses the four homeowners, two of them in Israeli custody, of being involved in the killing of an Israeli soldier, this past August.

International bodies and rights groups say Israeli demolitions of Palestinian structures in the occupied West Bank and East Jerusalem are an attempt to uproot Palestinians from their native territory and confiscate more land for the expansion of illegal settlements.

Earlier this month, Israeli rights group B’Tselem revealed that, in the period between 2006 and October 31 of this year, Israel demolished at least 1,489 Palestinian residential units in the West Bank (not including East Jerusalem), displacing 6,508 people – including at least 3,264 minors.

Israel has been occupying the West Bank, including East Jerusalem, since 1967. Ever since, it has been building settlements throughout the land, in a move condemned by the UN and considered illegal under international law.

About 600,000 Israelis live in over 230 illegal settlements in the West Bank and East Jerusalem.