This year marked a jubilee since the founding of the settlement in Hebron. Throughout the past 50 years, thousands of soldiers were deployed in the city, us included. Being sent by Israeli governments to enforce the occupation in Hebron, we have become far too familiar with the separation policy implemented in the city, the restriction on Palestinian’s movement, and the “sterile” streets in the city center. The checkpoints, the stop-and search missions, the mappings of Palestinian homes and frequent night raids, are all part of the IDF’s daily routine in Hebron, that we were sent to maintain. For years we’ve been guarding the settlers of Hebron, and have been witnessing their violence and criminal actions, not just against Palestinians, but also toward us soldiers.

This week, we’re publishing a new booklet of testimonies of soldiers and officers of various ranks and units who served in the city between 2011-2017.

Breaking the Silence was founded in the aftermath of our service in Hebron and the experiences we had there, and this is the fourth booklet that we’ve dedicated solely to the city. It offers a diverse and up-to-date insight into the reality of the city, that on one hand is home to one of the most messianic, violent and extremist settler communities, and on the other hand captures the essence of the occupation, as well as our role in it as soldiers, as a whole.

Read the full booklet on the Breaking the Silence website.

Here is how we chose to open this new booklet:

This year, the Israeli settlement in the heart of the city of Hebron marked its 50th year. Over the years, due to the Israeli government’s actions, the settlement movement, and the IDF’s heavy presence, the city center of Hebron – one of the largest Palestinian cities in the West Bank – has turned into a ghost town, almost completely devoid of Palestinians. From the invasion of the Park Hotel by Rabbi Levinger and his students in April of 1968; the takeover of Beit Hadassah in April of 1979; the massacre committed by Baruch Goldstein at the Tomb of the Patriarchs in February of 1994; and to date, the story of the settlement in Hebron faithfully represents the story of the occupation at large.

In the past, settlers’ daily violence and disregard for the rule of law, the deprivation of Palestinians’ most basic rights, and the ongoing actions of soldiers maintaining this oppressive system were considered stains worth trying to conceal. However, in recent years it seems as though we have shed our pretense and sense of shame. Instead of striving to change the reality, the Israeli government has been working to strengthen and deepen the Israeli settlement in the heart of the Palestinian city.

This is your time to help us in exposing the public
to our new booklet of testimonies!

Share one of the following on social media and with your friends: 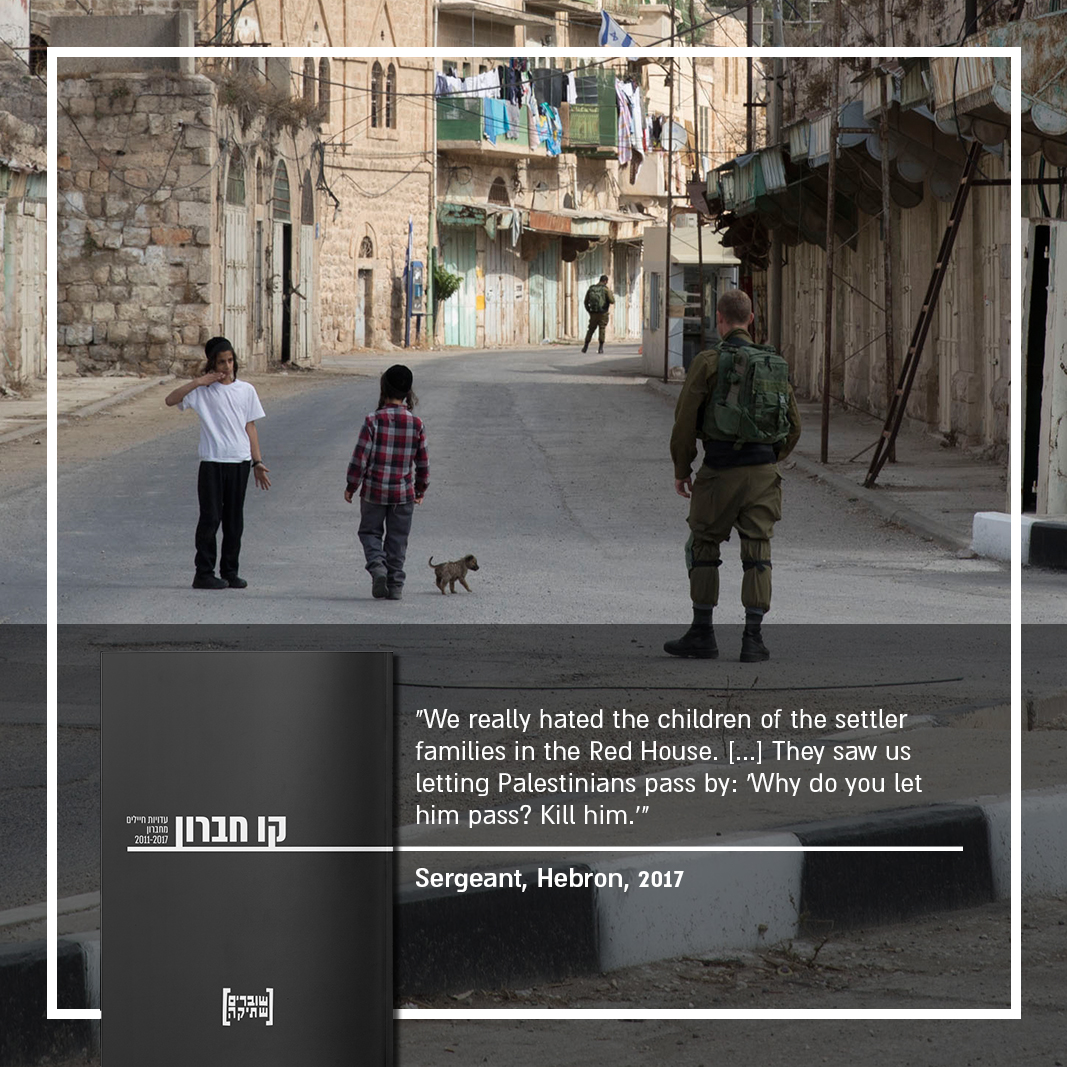 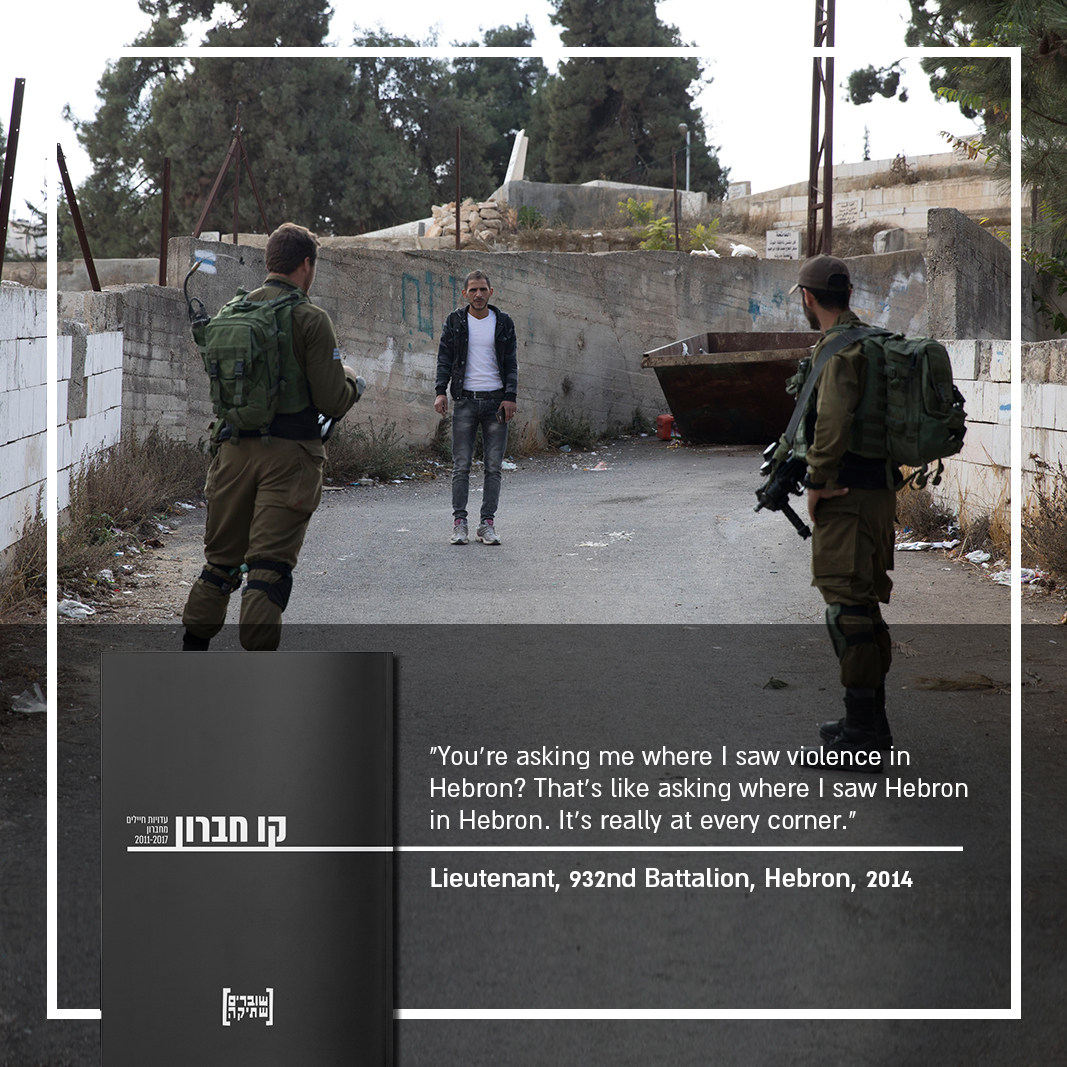 Breaking the Silence (BTS) is an organization of veteran combatants who have served in the Israeli military since the start of the Second Intifada, and have taken it upon themselves to expose the Israeli public to the reality of everyday life in the Occupied Territories. They endeavor to stimulate public debate about the price paid for a reality in which young soldiers face a civilian population on a daily basis, and are engaged in the control of that population’s everyday life. Their work aims to bring an end to the occupation.

Reposted with permission from BTS.