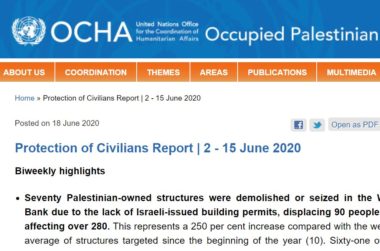 Of these operations, 28 were recorded in East Jerusalem, 26 in the Hebron governorate, 15 in the Ramallah governorate and the rest elsewhere across the West Bank.

On five other occasions, Israeli forces entered Gaza and carried out land-levelling and excavation operations near the perimeter fence, east of Gaza, Beit Lahia, Jabalia and Rafah.

While none of the attacks resulted in injuries, the targeted sites in Gaza sustained damage.

Additionally, a number of incendiary balloons were launched from Gaza towards southern Israel, for the first time in several months, with no damage reported.

This measure was adopted in response to the Israel’s intention to annex parts of the West Bank. Since 21 May, the PA has been only coordinating the exit of exceptional life-saving cases, while in some cases applications by patients have been forwarded to the Israeli authorities by human rights organizations.

As part of the restrictions imposed to contain the COVID-19 pandemic, the Rafah crossing with Egypt has been completely closed for the exit of people from Gaza, including patients, since 11 March.

One of the injuries was a ten-year old girl, who was pushed by a settler in the Old City of Jerusalem, sustaining an eye injury.

The remaining nine Palestinians injured were stoned or beaten next to the settlements of Asfar (Hebron) and Homesh (Nablus); near the herding community of Khirbet Tana (Nablus), in the Dead Sea area; and in the Israeli-controlled area of Hebron city (H2).

In the latter incident, which was caught on camera, an Israeli soldier stopped the attack and helped the Palestinian man to escape. In two incidents in Burin (Nablus) and Kafr ad Dik (Salfit) villages, settlers set fire or cut down at least 90 trees.

Additionally, assailants believed to be settlers vandalized vehicles, tents and water-related structures in the villages of Jamma’in, As-Sawiya and Lifjim (all in Nablus), Al Mughayyir (Ramallah) and Kifl Hares (Salfit), as well as in the H2 area of Hebron.

In another six incidents, settlers grazed their sheep on land belonging to farmers from Qawawis community (Hebron), damaging at least 20 dunams of seasonal crops.