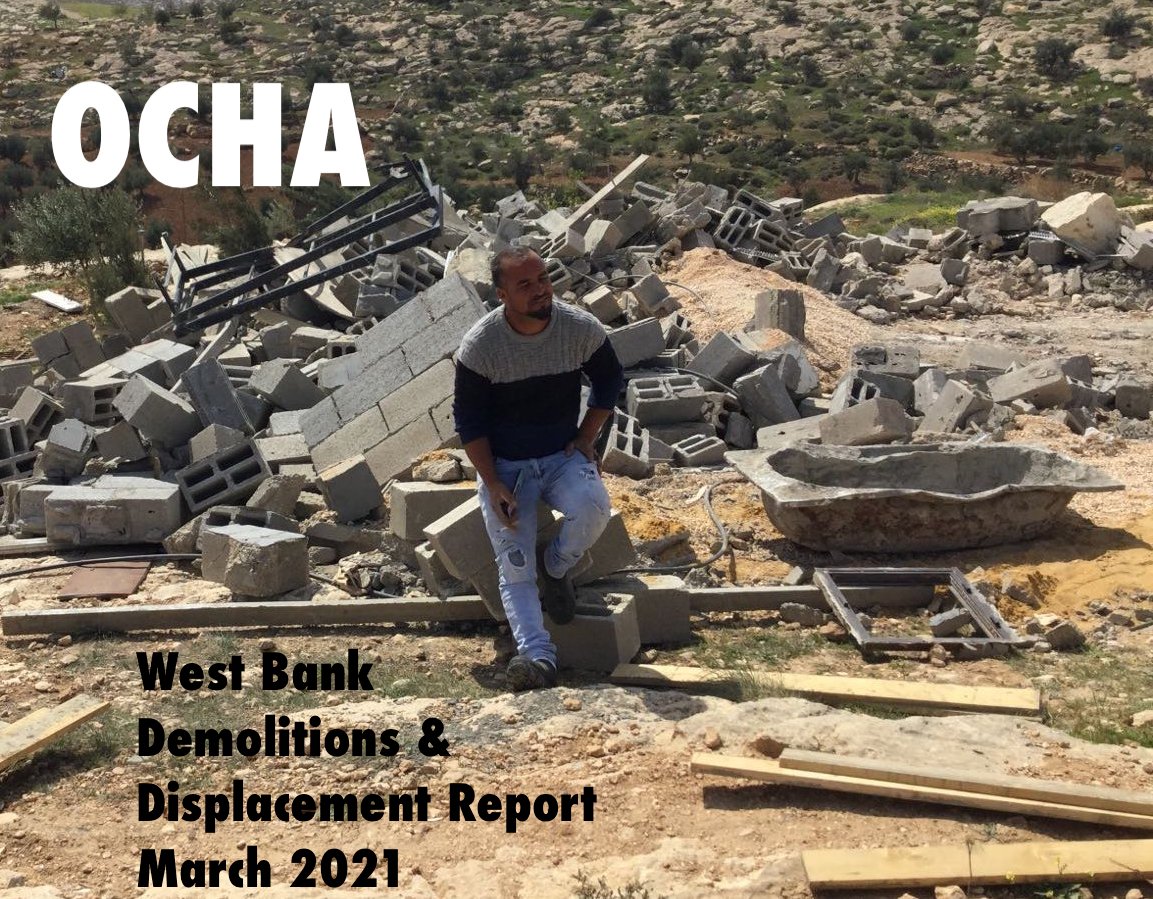 In March, the Israeli authorities demolished, forced people to demolish, or seized 58 Palestinian-owned structures across the West Bank, including East Jerusalem. This resulted in the displacement of 81 people, including 42 children, and otherwise affected the livelihoods, or access to services, of nearly 200 others. All the structures were located in Area C or East Jerusalem and were targeted due to a lack of building permits, which are nearly impossible for Palestinians to obtain.

Sixteen of the structures, all located in Area C communities, had been provided as humanitarian aid for a total value of more than 20,000 euros. Another 29 donor-funded structures, at a value of nearly 86,000 euros, were served demolition orders in Hammamat al Maleh – Al Meiteh, a Bedouin and herding community in the northern Jordan Valley, which is now facing the risk of mass-demolition.

In the first quarter of 2021, the Israeli authorities demolished, forced people to demolish, or seized at least 292 Palestinian-owned structures across the West Bank, including East Jerusalem, displacing 450 people, including 246 children. This constitutes a 121 % increase in the targeting of structures and a 126 % increase in people displaced, compared with the same period in 2020 (132 and 201 respectively). Also, the monthly average of structures targeted in 2021 so far (97) constitutes a 37 % increase compared with the monthly average in all of 2020 (71).

Forty-two of the structures targeted in March were located in Area C, 24 (or 57 %) in areas designated by the Israeli authorities as closed military zones for training or ‘firing zones’. More than half of the targeted structures (23) were located in Bedouin and herding communities, including ten structures provided as
humanitarian aid. These communities are some of the most vulnerable in the West Bank, with limited access to education and health services, and to water, sanitation, and electricity infrastructure. The practice of seizing unlicensed structures in Area C has steadily increased in recent years, both in absolute terms and as a proportion of structures targeted overall.

In March, 28 structures (67 % of all structures targeted) in Area C were seized without prior warning. So far in 2021, 64 % of targeted structures have been seized, more than double compared with 2020 (30 %). Seizure procedures do not oblige the authorities to provide prior notice, thus preventing affected people from formally objecting in advance. Seizure procedures have been characterized by the ICA Head of the Supervision Unit as “a strategic tool”.

Sixteen structures were demolished in East Jerusalem: nine were demolished by the Jerusalem Municipality and seven by the owners themselves, following the issuance of a demolition order. In one of the incidents, on 24 March, the Jerusalem Municipality, along with Israeli forces, demolished a home in Jabal Al Mukabbir, displacing two households comprising seven people, including three children, one of whom was a five-day-old infant. The households had been paying fines as a penalty for lacking an Israeli-issued building permit since June 2019, approximately NIS900 a month (approximately 230 euros).

Since the beginning of 2021, nearly 50 per cent of all demolitions in East Jerusalem have been carried out by the owners themselves, following the issuance of a demolition order by the Jerusalem Municipality.

In late February, the Jerusalem Municipality requested the Local Affairs Court to reactivate demolition orders against some 70 Palestinian homes in the Al Bustan area, in the Silwan neighbourhood of East Jerusalem, which would lead to the displacement of up to 1,500 Palestinians. The Municipality has longstanding plans to build a touristic and archeological park on the site, but following public pressure, the demolition orders had been frozen since 2010 to allow for a solution negotiated between the Municipality and the residents.

The latter submitted alternative plans to allow them to stay in the area, all of which were rejected by the District Planning Committee, the last one in December 2020. In mid-March, the residents submitted a response to the Municipality’s request to the court, asking to freeze the demolition orders for 12 more months, to proceed with further negotiations.