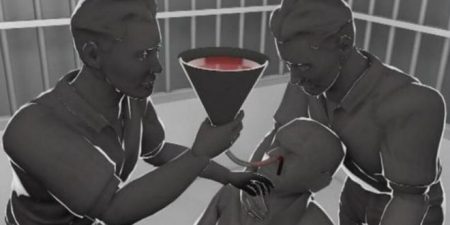 The head of the Commission of Detainees and Ex-Detainees Affairs (CDA), Issa Qaraqe’, and the head of the Palestinian Prisoners’ Society, Qaddoura Fares, called on the World Health Organization to assume an attitude against the policy of Forced-Feeding intended to be applied by the Israeli Prison Service on the detainees who have been on hunger strike since 17 April, 2017.

This comes, according to the PNN, after the circulation of similar news by the Israeli media on beginning preliminary preparations to transfer doctors form foreign countries for implementing force-feeding of detainees on hunger strike.
This also comes following suit with the medical syndicate in Israel, which refuses to apply the procedure because it may cause death.

The Media Committee of the Commission of Detainees and Ex-Detainees Affairs and the Palestinian Prisoners’ Society affirmed, in a statement today, that the international community has forbidden this kind of nutrition, and also asserted that detainees have the right to choose any way of hunger strike as a means of legitimate protest, and no party has the right to intervene in his decision.

The committee considers this a license to kill Palestinian detainees under the pretext of protecting them.

It also pointed out that applying this policy caused the deaths of both Rasem Halaweh and Ali Ja’fary at Nafaha prison, in 1980, while they were conducting a hunger strike.

Moreover, the commission pointed out that the forced-feeding is done with an instrument called “zunda”, which is placed either by nose or mouth; this is repeated after the detainee is handcuffed. It is often accompanied by bleeding due to inserting the instrument repeatedly.

Israeli authorities used this type of nutrition with Palestinian detainees who conducted hunger strikes from 1970-1980. They stopped using it by decision of the Supreme Court, after the death of the two detainees. However, the Israeli Knesset has again approved this law in 2015.

It is worth mentioning that 1,500 Palestinian detainees continue the battle of freedom and dignity, which was launched on April 17, 2017 to achieve their basic rights, from which they are deprived and which they have achieved previously through hunger strikes.

Their demands are represented in ending the policy of administrative detention (indefinite imprisonment without charge or trial), ending solitary confinement and the prevention of lawyers and family visits and other basic demands.