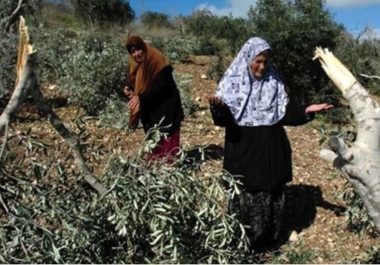 Israeli settlers, on Wednesday, damaged 50 olive trees and grapevines in al-Khader town, south of Bethlehem city, in the southern occupied West Bank, according to a local source.

Hisham Mohammad Sbeih, the landowner, told Palestinian WAFA News Agency that upon entering his grove, near the Gush Etzion colonial settlement bloc, he was completely shocked to find out that illegal settlers had damaged 40 grapevines and 10 olive trees.

He stated that Israeli settlers are exploiting the lockdown enforced on Bethlehem district over the spread of the coronavirus, to ensure the seizure of more Palestinian territory. Sbeih added that this was not the first time that settlers wreaked havoc on his land.

According to the United Nations Office for the Coordination of Humanitarian Affairs (OCHA) latest report, for the period of 3-16 March, nearly 1,600 trees on Palestinian owned land, were vandalized by illegal Israeli settlers in the occupied West Bank.