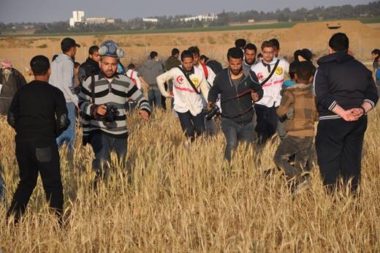 The Palestinian Center For Human Rights: Ref: 58/2019 Date: 12 April 2019: Time: 18:00 GMT: On Friday evening, 12 April 2019, in excessive use of force against peaceful protesters on the 54th  Friday of the March of Return and Breaking the Siege, Israeli forces killed a Palestinian child and wounded 93 civilians, including 17 children, four women, three paramedics, and a journalist, in eastern Gaza Strip.

According to observations by PCHR’s fieldworkers, the Israeli forces who stationed in prone positions and in military jeeps along the fence with Israel continued to use excessive force against the demonstrators by opening fire and firing tear gas canisters at them.  As a result, dozens of the demonstrators were hit with bullets and teargas canisters without posing any imminent threat or danger to the life of soldiers.

Hundreds, including children and women, approached the border fence with Israel in front of each encampment and gathered tens of meters away from the main border fence, attempting to throw stones at the Israeli forces and firing incendiary balloons along the border fence.

Demonstrators chanted slogans, raised flags and, attempted to approach the border fence, set fire to tires and tried to throw stones at the Israeli forces. Although the demonstrators gathered in areas open to the Israeli snipers stationed on the top of the sand berms and military watchtowers and inside and behind the military jeeps, the Israeli forces fired live and rubber bullets in addition to a barrage of tear gas canisters.

The Israeli shooting, which continued at around 19:00, resulted in the killing of Maysara Mousa Suliman Abu Shalouf (15), from ‘zbit Beit Hanoun. At approximately 17:00, Maysara sustained a live bullet wound that entered his left waist and settled in the pelvis while standing few meters away from the border fence in eastern Jabalia.

He was left bleeding for 20 minutes because medical personnel were unable to access him. After that, he was taken to a medical point and then referred to the Indonesian Hospital, where his death was declared at approximately 17:55.

Moreover, 93 civilians, including 17 children, four women, three paramedics, and a journalist, were wounded. Forty-four of them were hit with live bullets and shrapnel, 46 were directly hit with tear gas canisters and three were hit with rubber bullets. In addition, dozens of civilians suffered tear gas inhalation and seizures due to tear gas canisters that were fired by the Israeli forces from the military jeeps and riffles in the eastern Gaza Strip.