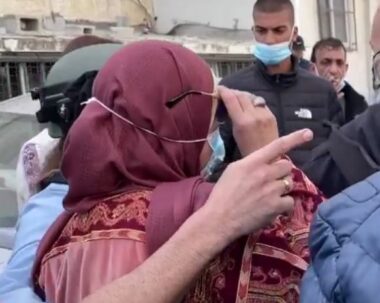 Israeli occupation soldiers and police officers resorted, Monday, to the excessive use of force against Palestinian women, holding a heritage activity in the at-Tour town, in occupied Jerusalem, and abducted two of them.

Sabrine Sayyad, one of the women who organized the bazaar and activity at the at-Tour Women’s Center, said the soldiers invaded the center and violently assaulted the women and anyone who was there.

She added that the soldiers abducted the center’s director, Ekhlas Sayyad, and heritage dresses designer Manal Abu Sbeitan, before moving them to an interrogation center in the occupied Palestinian capital, Jerusalem.

The soldiers also confiscated many Palestinian heritage dresses and various contents of the center.

The activity was held to mark March 8, International Women’s Day; however, the Israeli occupation army and the police decided to shut it down.

The two women were released after several hours of interrogation, by Israeli security officers who claimed that the activity was organized by the Palestinian Authority.