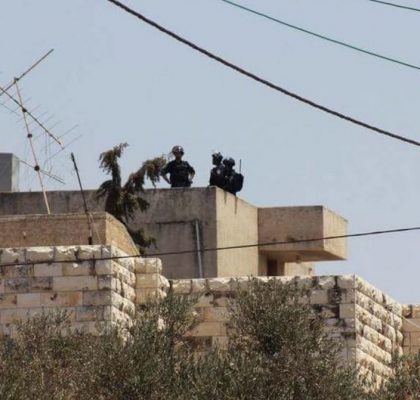 One Palestinian youth was shot and injured by Israeli forces, with a rubber-coated metal bullet during the attack on peaceful protestors.

Morad Eshteiwi, the coordinator of the ‘Popular Resistance Committee’, told Maan that the youth was transferred to Rafidiya Governmental Hospital in Nablus.

Eshteiwi said dozens of occupation soldiers invaded the village, and took over several Palestinian homes in the area, forcing the residents out, and using their rooftops as sniper posts to target protesters. Israeli forces fired rubber-coated steel bullets, tear-gas bombs as well as stun grenades at the crowd of non-violent protesters.

Palestinians in Kafr Qaddoum in the northern West Bank have staged weekly peaceful protests since 2011 to object to the annexation wall constructed on village land, and the closure of the road to Nablus since 2003.