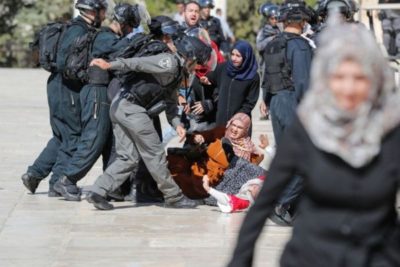 Many international organisations and human rights groups have confirmed that Israel imposes a racist — “apartheid” — regime which oppresses the Palestinians. This regime denies them basic rights and exposes them to repeated attacks by illegal Jewish settlers, which increases the tension in the occupied Palestinian territories and within Israeli itself. The Palestinians continue to be beaten, killed and forcibly displaced.

On 9 May, the Israeli authorities tried to prevent thousands of Palestinians living in the 1948-occupied Palestinian territories — they are Israeli citizens — from reaching Al-Aqsa Mosque in occupied Jerusalem to commemorate the twenty-seventh night of the holy month Ramadan, which is a sacred night for all Muslims. Mass protests followed, and Zionist settlers did not hesitate to attack the Palestinians with live ammunition and hand grenades. The Israeli government encourages a policy of divide and rule, pitting one ethnic group against another, but in this case the Israeli police arrested more than 500 Palestinians rather than the fully armed and dangerous settlers, not one of whom was detained. If nothing else, this was an indication of the institutionalised racism of the Israeli authorities against its own Palestinian citizens.

Who are the Arab Palestinian citizens of Israel?

Although Zionist terrorists displaced more than 800,000 Palestinians from their homes in 1948, a number of Palestinians remained in the occupied cities of what is now called Israel. According to the Israeli Central Bureau of Statistics (CBS), in 2019, the number of Palestinians who reside in the territory occupied in 1948 was estimated at about 2 million, one-fifth of the population of the occupation state. They live mainly in the Galilee, the Negev and the “Triangle”, Arab towns and villages adjacent to the Green (1949 Armistice) Line between Israel and the occupied West Bank.

Although Palestinians in the 1948-occupied Palestinian territories have Israeli citizenship, they are faced with institutional racism. They are not regarded or treated as equals in any aspect of life. Dozens of laws have been enacted to reinforce this racism, most notably:

Not only have the Israeli authorities enacted racist laws against the Palestinians, but state officials also issue statements that directly affect the Arab Palestinians and their lives, and incite settlers against them. The number of attacks on Palestinians has increased accordingly.

More than 1,700 Palestinian citizens of Israel have been killed between 2000 and 2020. The Israel occupation authorities have refrained from conducting any investigations, which leads us to ask how the Israeli police can arrest the perpetrators of crimes against Jewish settlers often within 24 hours, while refusing to investigate or even care about crimes committed against the Palestinians, the perpetrators of which are subsequently usually registered as “persons unknown”?

In its report dated 15 March 2017, the UN Social and Economic Commission for Western Asia (ESCWA) answered this question, stressing that the Israeli authorities have established an apartheid regime that dominates the entire Palestinian people. The facts and evidence prove beyond reasonable doubt that Israel is guilty of the crime of apartheid as defined by international law.

Human Rights Watch also accused Israel of apartheid in its report dated 27 April this year. Indeed, it accused the state of committing two crimes against humanity, by pursuing a policy of apartheid and persecution against the Arab citizens of Israel as well as the inhabitants of the 1967-occupied Palestinian territories.

According to the facts backed up by the UN and other reports, the Israeli authorities practice the ugliest forms of racism against the Palestinian people residing in the 1948-occupied Palestinian territories. This reinforces the continuous tension and increases the chance of violence. The UN and its member states are legally obligated to take urgent action to end all forms of apartheid and take appropriate steps against the guilty party. Racism is at the very heart of Israel; its impunity must end.