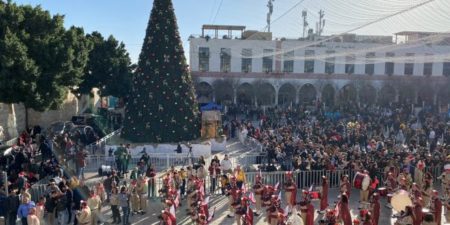 The group was additionally accompanied by priests, deacons, and representatives of the Syriac institutions, the Mukhtar of the sect and its leaders, to be greeted by dignitaries and representatives of the Syriac institutions in the governorate, with the motorcade heading through Al-Mahd Street, to Nativity Square and the Paradise Hotel. The procession was presented by the Palestinian Traffic Police, at the junction of Beit Sahour Terra Sancta School for Girls Nuns of Mar Youssef, leading to the procession of Scout groups.

The procession was received at Nativity Square by the mayor of Bethlehem, lawyer Anton Salman; the mayor of Beit Jala, Nicolas Khamis; the mayor of Beit Sahour, Jihad Khair;the governor, Major General Kamel Hamid; and Colonel Hqouti Tariq Al Haj, director of the police of the province and the commander of the region; Brigadier General Nazer Amro, the head of the Presidential Committee for Church Affairs, Dr. Ramzi Khoury; Eng. Ziad Al-Bandak; Mrs. Rola Ma’aya, the Minister of Tourism and Antiquities, Ministers and Representatives.

In representation were all security agencies, institutions, and associations; the Priest of the Syriac Parish, Father Boutros Neama; the President and members of the St. Ephrem Syriac Orthodox Association; the heads, representatives and dignitaries of the Syriac Church, and all the people of the region.

Human Interest 01/05/20 In a Decade, Israel Displaced 9,249 Palestinians, Half of Them Children