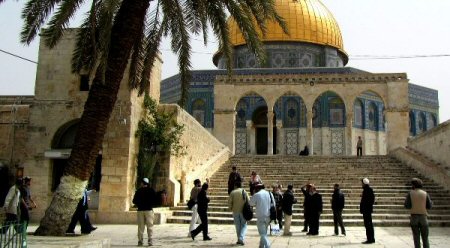 Dozens of Israeli settlers stormed, on Sunday morning, Al-Aqsa Mosque compound from Mughrabi Gate, under heavy guard from Israeli special police, in a clear deliberate violation of its sanctity on the second day of the holy month of Ramadan.

According to Al Ray Palestinian Media Agency, Israeli occupation police opened Mughrabi Gate at 7:30am, deploying its elements and special units in the mosque courtyards, in order to provide full protection for the extremists.

The media coordinator in the Department of Islamic Endowments in occupied Jerusalem, Firas Aldebs, said that 77 extremists and 50 students stormed Al-Aqsa Mosque, and organized provocative tours in various parts of its yards.

Thousands of citizens performed Eshaa and Taraweeh prayers on the first day of Ramadan in the courtyards of the mosque amidst Israeli measures.

Al Aqsa Mosque is the third holiest site in Islam and also venerated as Judaism’s most holy place, alleged to be the original site of Solomon’s Temple. Disputes surrounding visitation to the site have historically flared tensions in the occupied Palestinian territory.