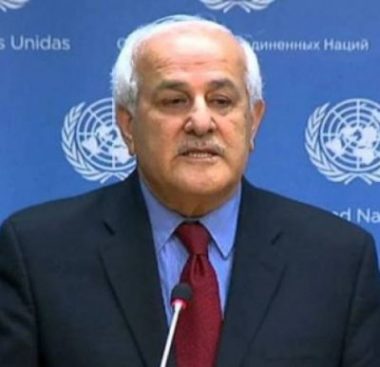 On Friday at dawn, Mansour told the Palestinian TV that the United States is pressuring the United Nations Security Council to delay the vote on the proposal after seeking to amend and alter it.

The original proposal was submitted by Kuwait, which is currently a non-permanent Security Council member.

Kuwait later circulated an edited draft of the same proposal for an International Protection Mission, reportedly to gain the support of European counties and other states that are members of the Security Council.

However, late on Thursday evening, it was announced that the Security Council postponed the vote on the proposal because the United States wanted to modify and alter it.

Mansour Ayyad Al-Otaibi, the Permanent Representative of Kuwait to the United Nations, said the United States provided its edited version very late, “But we still have to discuss these changes.”

Instead for calling for an international protection mission, the United States’ version called on the United Nations Secretary-General, Antonio Guterres, to submit “recommendations,” and asks for completing the report within 60 days.

Meanwhile, the United States Ambassador to the United Nations, Nikki Haley, said her country will use it Veto power to topple the Kuwaiti proposal for providing international protection to the Palestinian people.

In his interview with Palestine TV, Mansour said the proposal’s essence is about providing protection to the Palestinian people, living under Israeli occupation, and added that he hopes “the United States won’t obstruct it.”

“If the United States topples and obstructs this proposal, then we have other options, including heading to the General Assembly,” he added.

Danny Danon, the Israeli Ambassador to the UN, attacked the Kuwaiti proposal, described it as “shameful,” and alleged that it was “only meant to support Hamas.”