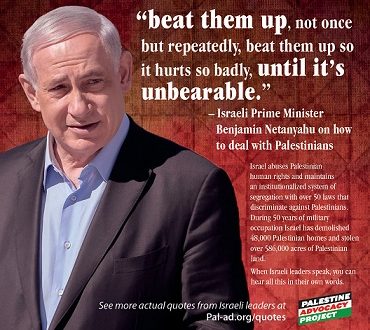 Palestine Advocacy Project, an NGO based in the Boston area, has launched a series of ads portraying prominent Israeli officials, such as Prime Minister Benjamin Netanyahu, and their disregard for the safety and well-being of Palestinians. These ads feature violent and bigoted direct quotations which highlight the contempt Israel’s US-backed leaders display for basic Palestinian human rights.

“If you do your own research, you’ll quickly find many more hateful quotes,” said Palestine Advocacy Project member Maggie Liu. “As a college student living on a politically-active campus, I know firsthand how little young people know about the reality of the situation. I hope these ads will bring some much-needed dialogue to campuses across the country.”

According to the PNN, nine universities across the United States, including Harvard, Boston University, Cornell, and University of California-Berkeley are publishing these ads in their newspapers. The ads quote a number of Israeli officials, such as Israeli deputy defense minister Rabbi Eli Ben Dahan, who asserted that Palestinians “are beasts, they are not human.” The ads all include a link to a webpage, (www.pal-ad.org/quotes) with additional quotes from Israeli leaders.

“It is beyond disturbing that someone in a position of power can say these things and not even flinch,” noted Farida El Hefni, a University of Rochester student. “How are these politicians that are so quick to accuse people of being anti-Israel or anti-Semitic the same ones using racist language to describe an entire group of people?”

Palestine Advocacy Project created these ads in order to spark conversation among young Americans on university campuses across the United States. The ads present a side of the Israeli-Palestinian conflict that is seldom featured in the American mainstream media. The indisputable, direct quotes from prominent Israeli officials are provocative, and in many cases, explicitly racist.

Palestine Advocacy Project has spent the past two years exposing the hypocrisy surrounding the U.S.’s relationship with Israel, and challenging negative stereotypes of Palestinians. The “One Word” campaign, which was released in 2014, showcased the many forms of violence Palestinians are subjected to on a daily basis. More recently, PalAd brought the works of Palestinian Poet Laureate Mahmoud Darwish to public spaces. This latest campaign, which focuses on the violent rhetoric of the upper echelons of Israeli political leadership, will give the American public new information on why the oppression of Palestinians continues.

“The sooner people realize that this isn’t just about conflict over land and that there are people literally calling for the erasure of Palestinians,” continues El Hefni, “the sooner we can get somewhere.”