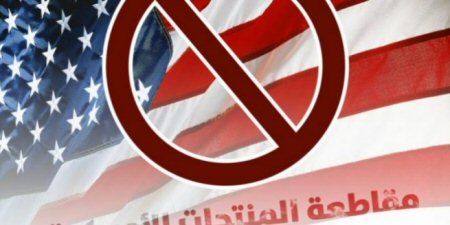 Representatives of the Palestinian National Action Teams, yesterday, discussed the launch of a campaign to boycott US products in Palestine, and later expanding it to the Arab and Muslim world and the world, in response to the US Administration’s positions supporting the Israeli occupation.

The meeting pointed out the recent US decisions supporting Israel and its occupation, including declaring Jerusalem as the capital of Israel, the fight against the UNRWA and the cut of its funding, Washington’s attempts to cancel the Palestinian refugees’ right of return, and the closure of the PLO office.

The participants stressed that practical steps must be taken to respond to the practices and racism of the American administration, which showed the complete bias towards the occupation state, and violation of all international conventions.

For his part, head of the Popular Struggle Coordination Committee, Munther Amira,  said that the United States has prepared the Palestinian people for such initiative when it declared its support for the racist occupation state, at the expense of legitimate national rights of Palestinians.

Amira told PNN that all of the popular factions, national action groups and the masses, are required to take a clear position against the United States, stressing that the Trump administration was the one to put itself in such position through its decisions.

Amira added that the campaign, which is being studied, should benefit from the experience of BDS movement by promoting the campaign on more than one level, pointing our its importance of implementing it on a Palestinian,  Arab and Islamic level, in addition to the need to promote it internationally, in order to contribute to exposing racist practices taken by the Donald Trump administration, and to signal its danger to the international community.

Amira concluded by saying that the campaign will be launched in the near future through local events, and will then invite the friends of the Palestinian cause, at the international level, and the brothers of the Arab peoples, to be part of the campaign.