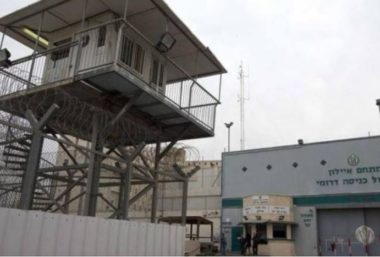 The Palestinian Prisoners’ Society (PPS) has reported that 33 detainees, held by Israel in the infamous Asqalan Israeli Prison, have started a hunger strike, rejected a series of punitive measures against them.

The PPS said that the detainees decided to start the strike to protest the bad living conditions, but mostly rejecting the violet searches of their rooms and private property.

It added that, this past October, the prison authority transferred many detainees from Asqalan to Nafha, without allowing them to take their belongings with them, and when they were moved back to Asqalan, they found out the extent of violence and destruction of their belongings, including finding a copy the Holy Quran on the ground with marks of a military boot on it.

The detainees refused to receive their belongings, and sent a protest letter to the prison administration, also informing it of their hunger strike.

The response they received was a threatening message, informing them that if they initiate a hunger strike, they will be moved to Section 12, which consists of very dirty solitary confinement cells, filled with bugs and insects.