Palestinian Detainees to be Moved to Tents Due to Overcrowding 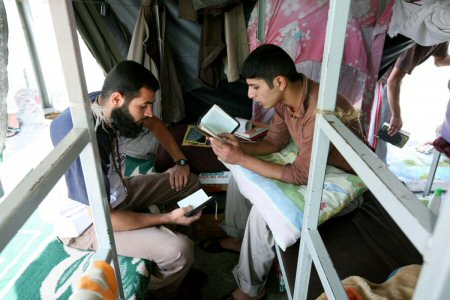 Israeli TV Channel 7 said, according to Days of Palestine, that the proposal is one of the solutions that the ministry is considering, to overturn the implementation of a High Court ruling on the issue.

In the middle of June, the Israeli High Court ruled that occupation authorities had to find alternatives to mitigate the overcrowding of Palestinian inmates in Israeli jails.

The High Court’s ruling came in response to a petition filed by several Israeli human rights organisations, in which they demanded increasing the cell space for each inmate to four square metres.

Currently, each cell in the Israeli occupation prisons is less than three-square metres, including bed and bathroom.

Israeli newspaper Haaretz recently reported the High Court as saying that the Israeli prisons are “not fit for human habitation.”

Some 6,500 Palestinians are currently held in Israeli jails, 57 of whom are women while 350 are children, according to the Palestinian Committee of Prisoners’ Affairs.