Palestinian Forced To Demolish His Home And Farm Near Bethlehem 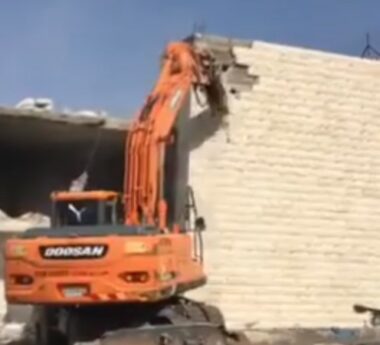 The Israeli army forced Saturday, a Palestinian to demolish his own home and farm in the al-Freidis area, east of Bethlehem city, south of occupied Jerusalem in the West Bank.

The Palestinian, Mahmoud al-Wahsh, said he was forced to demolish his 60 square/meter home, and the 40 square/meter farm, under the pretext of being built without a permit from the “Civil Administration Office,” the administrative branch of Israel’s illegal occupation of Palestine.

He added that the family had to demolish their own properties, otherwise the army would demolish them using its equipment and bill them for the demolition costs in addition to the excessively high fines and fees.

The area where the property is built in under full Israeli control, and lacks basic infrastructure, in addition to severe restrictions on constructions or expansion of the existing property.

According to data from the Israeli Committee Against House Demolitions (ICAHD), the Israeli occupation authorities have demolished 865 structures in the occupied territory in the year 2020, displacing 1014 Palestinians, in addition to affecting 5615 Palestinians.

It added that, in April of this year 2021, 22 Palestinian structures were demolished, in addition to two in the Al-Arakib Bedouin village in the Negev, and that 13 Palestinians were displaced in addition to 95 others who were affected by the demolitions.