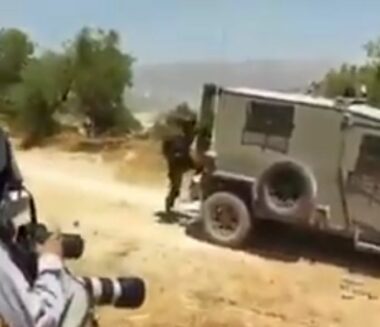 Israeli soldiers injured, Friday, at least twenty-two Palestinians during a nonviolent procession against the illegal colonialist activities and takeover of Palestinian lands, in Abu Sbeih Mountain in Beita village, south of the northern West Bank city of Nablus.

Local sources said dozens of Palestinians marched to their mountain and performed noon prayers on their lands.

Israeli soldiers then invaded the area and started firing live rounds, rubber-coated steel bullets, gas bombs, and concussion grenades at the Palestinians to force them away.

Medical sources said two Palestinians were shot with live rounds, three with the rubber-coated steel bullets, 15 suffered the severe effects of tear gas inhalation, and two sustained cuts and bruises after falling while the soldiers were chasing them.

It is worth mentioning that the Israeli colonialist settlers have attempted to install an illegal outpost on the Palestinian lands on the top of the mountain, but the locals were able to stop them and removed their outposts,

However, enjoying the protection of the Israeli army, the colonists recently brought more than 20 mobile homes to create their outpost.