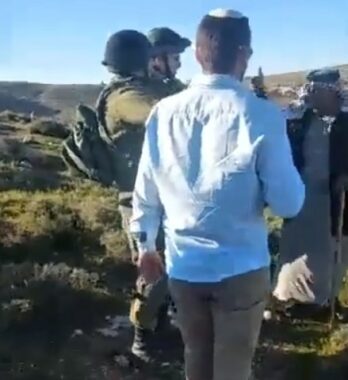 He added that the lands are in al-Haj Meadow, close to the illegal Maale Amos and Ibei HaNahal colonies, built on private Palestinian lands.

The colonists started bulldozing the lands and preparing for an electricity network, in addition to brings chairs, seats, and umbrellas to prepare for a new illegal outpost.

They also illegally annexed a Palestinian well used by the Palestinians, including shepherds and farmers in the area.

Ghazal stated that the colonists are trying to establish an area for Israeli tourism and picnics on the private Palestinian lands.

On Thursday, the Israeli occupation authorities decided to build 560 colonialist units in Maale Amos illegal colony, and 90 in Ibei HaNahal.

Maale Amos is built on Palestinian lands in Kisan and Rashayda villages, and Ibei Hanahal was constructed on lands owned by Kisan village.

Two days ago, the colonists occupied an old Jordanian army base, and its surrounding lands to establish a new outpost, in the Rashayda village.