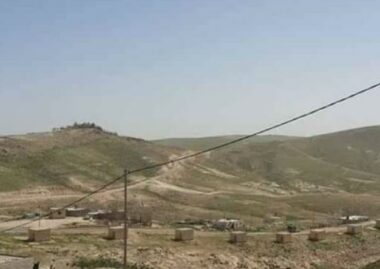 A group of Israeli colonists, illegally squatting on Palestinian land, occupied an old Jordanian army base, and its surrounding lands to establish a new outpost, in the Rashayda Palestinian village, east of Bethlehem.

Fawwaz Rashayda, the head of the Rashayda Village council, said the colonists occupied a 400 square/meter building, which was used as a Jordanian army base in the Rajem an-Baqa area.

Rashayda added that the colonists cleaned the place up, hooked it with water and electricity, in addition to bringing beds and installing floodlights after the illegal takeover.

He stated that the area is also used by the Palestinian shepherds, in addition to being classified by Israel as a “natural reserve,” which means that the Palestinians cannot access it.