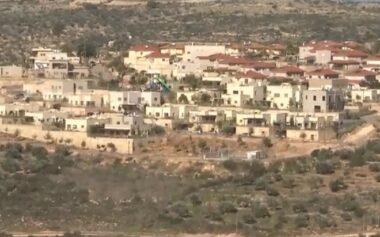 Israel has started the digging and preparing for a new segregated road on lands owned by Palestinians from Iskaka and Yasuf village, east of Salfit in central West Bank.

Fawzi Lami, the mayor of Iskaka, said the army bulldozed large areas of Palestinian lands in the southeastern part of the village, known as as-Serb, close to the illegal Nofei Nehmia illegal colony.

He added that the planned segregated road would be 1200 meters long and 6 meters wide.

The official stated that this means Israel would be isolating 100 Dunams of Palestinian lands behind the road and would lead to their illegal annexation.

“The Palestinians’ very existence in the area has been directly targeted by Israel for dozens of years; for instance, the farmers have been prevented from rehabilitating or planting their lands,” Lami said, “Three years ago, the army uprooted hundreds of olive trees, and bulldozed farmlands, before illegally annexing them, because they are in Areas B and C of the occupied West Bank.”

He also said the army has been trying to force the Palestinians out of the entire area by preventing them from constructing homes and buildings, in addition to issuing demolition or halt construction orders.

It is worth mentioning that many Palestinian homes are only about twenty-five meters away from the new planned segregated road.

Area A is %18 of the occupied West Bank, where the Palestinian Authority controls civil affairs, including internal security.

Area B, %21 of the West Bank, where the PA controls the health, education, and economy sectors.  Both areas are under full external Israeli security control which allows the army to frequently invade them at any time to demolish homes, abduct Palestinians and operate under the pretext of “security.’

The number of Palestinians living in Areas A and B is at least 2.8 million, in major governorates.

Area C (%61) of the West Bank is under full Israeli control, where more than 200 illegal colonies, and at least 100 outposts, are installed on Palestinian lands; the number of colonists is about 400.000.

The Israeli Information Center for Human Rights in the Occupied Territories (B’Tselem) said that Israel retains control of security and land-management in Area C and views the area as there to serve its own needs, such as military training, economic interests, and settlement development. Ignoring Palestinian needs, Israel practically bans Palestinian construction and development. At the same time, it encourages the development of Israeli settlements through a parallel planning mechanism, and the Civil Administration turns a blind eye to settlers’ building violations.

The International Court of Justice (ICJ) affirmed that the rules of the Geneva Conventions constitute “intransgressible principles of international customary law”. Only a limited number of international norms acquire this status, which is a reflection of the seriousness and importance with which the international community views them. Breaches of these norms give rise to certain obligations on all other states, or “third states”.