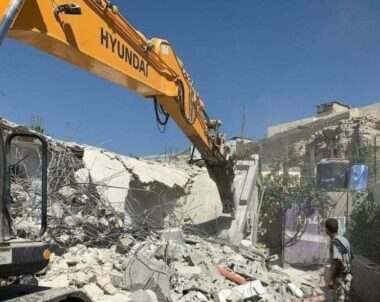 The City Council in the occupied Palestinian capital, Jerusalem, forced a Palestinian to demolish his home in Jabal al-Mokabber, allegedly for being built without a permit.

The Palestinian, Ali Khalil Shqeirat, started removing his furniture and belongings from the property, before demolishing it using basic equipment.

It is worth mentioning that, several days ago, the soldiers invaded the property and handed the demolition order, and on Sunday, Ali received a phone call from the police demanding him to demolish the property immediately or else the city would demolish it using its equipment and workers, in addition to billing him and forcing him to pay excessively high fines and fees.

In related news, the soldiers invaded a home, owned by the Matar family, and ordered them to demolish their home within 21 days.

Matar said he build his home in 2011, and the city later ordered its demolition, in addition to imposing a 30.000 Shekels fine, before issuing the final demolition order just a few days ago.

ICAHD also reported the demolition of more than 130,000 Palestinian homes in Israel and the Occupied Palestine Territory (OPT) since 1947.