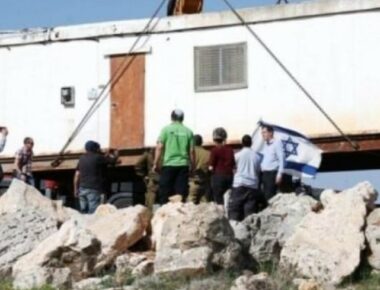 HEBRON, Sunday, July 25, 2021 (WAFA) – Illegal Israeli settlers embarked today on rebuilding a colonial settlement outpost that was evacuated two months ago near the town of Yatta, in the Hebron province in the south of the occupied West Bank, according to local sources.

Rateb Jabour, the coordinator of the Anti-Settlement Commission in Hebron, told WAFA that a group of Israeli settlers broke into the site of the abandoned settlement outpost and embarked on installing residential facilities and caravans there.

Two months ago, Palestinian anti-colonization protesters removed the outpost and pressed the colonial Israeli settlers who had settled there to leave the site.

There are over 700,000 colonial Israeli settlers living in Jewish-only settlements across the West Bank in violation of international law, particularly the Fourth Geneva Convention which expressly bans the relocation of the occupying nation’s civilian population to the land of the occupied.