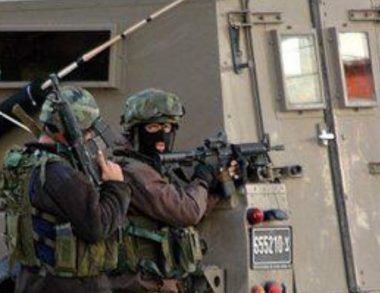 A Palestinian was injured by bullet shrapnel on Tuesday, during clashes which broke out with Israeli soldiers in Salem village, to the east of Nablus, said medical sources.

Ahmad Jibrel, head of the ambulance and emergency department of the Red Crescent in Nablus, told WAFA that paramedic crews dealt with a shrapnel injury during clashes that erupted in Salem village, with Israeli forces.

Meanwhile on Tuesday, Israeli settlers set up tents on Palestinian-owned land in district.

Ma’an further reports that settlers from the illegal Elon Moreh settlement set up tents in the Ras al-Ein area, east of the Deir al-Hatab village, and fenced off the area.

According to the Applied Research Institute – Jerusalem (ARIJ), Deir al-Hatab was divided into Area B and Area C after the Palestinian Liberation Organization (PLO) and Israel signed the Oslo II Interim Agreement in 1995.

Approximately 4,783 dunams — 42 percent of the village’s total area — were classified as Area B, where the Palestinian Authority (PA) controls civil matters and Israel retains control over “security.”

The rest of the 58 percent of the village’s area — approximately 6,681 dunams — was classified as Area C, where Israel retains full control over security and civil administration, making Palestinian building and land management “illegal” unless approved by the Israeli Civil Administration.

The majority of Deir al-Hatab’s population resides in Area B, while most of the land lying within Area C is agricultural land or has been confiscated for Israeli settlements.

Israel has confiscated 659 dunams from the village for the establishment of the Elon Moreh settlement, which sits on the north-eastern side of the village, according to a 2014 report by ARIJ.

Since the establishment of the settlement in 1979, which at the time of the report had 1,595 residents, Palestinian residents and farmers of Deir al-Hatab have been subjected to various settler attacks, in addition to the settlers having also stolen crops, damaged trees and attacked animals, homes and other private property.

According to ARIJ, settlers from Elon Moreh have cut off the village’s electricity supply by destroying the electricity infrastructure, and in 2009, settlers constructed a barbed wire fence around a water spring which served as one of the most important water sources in the village, despite an Israeli court ruling that stated the right of the Deir al-Hatab residents to the spring.

In addition to the hundreds of dunams of Deir al-Hatab’s land confiscated for Elon Moreh’s use, Israeli authorities have also confiscated 50 dunams of the village’s land for an Israeli “industrial zone,” 12 dunams for the establishment of an Israeli military base, and more unspecified amounts of land for the establishment of checkpoints around the village, and the settler bypass Road 555, which links Elon Moreh with the Huwwara checkpoint south of Nablus and the Itamar settlement.

Land from the village was also seized by Israeli settlers who used the land to establish two illegal settlement outposts to the east of the village on the hills that surround Elon Moreh.

The aim of these outposts — which stand in contravention with both Israeli and international law — according to ARIJ, was to extend the Elon Moreh settlement “and in turn, control more Palestinian land.”

As seen in the case of Deir al-Hatab, Israel rarely grants Palestinians permits to build in the West Bank, including East Jerusalem, although the estimated 550,000 Jewish Israeli settlers in the occupied Palestinian territory are more easily given building permits and allowed to expand their homes and properties.

Nearly all Palestinian applications for building permits in Area C — the more than 60 percent of the West Bank under full Israeli military control — are denied by the Israeli authorities, forcing communities to build illegally.