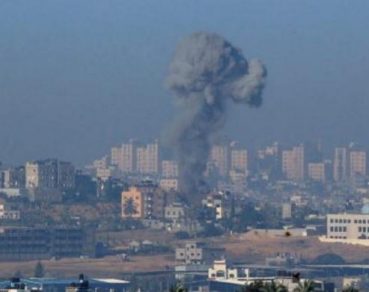 Three Palestinians were injured, Sunday, after the Israeli army fired shells targeting a Hamas center, and an empty land, in Beit Hanoun, in the northern part of the Gaza Strip. The army  stated it was retaliating to a rocket fired from Gaza.

Dr. Ashraf al-Qedra, the spokesperson of the Ministry of Health in Gaza, said three Palestinians were moderately wounded, and were moved to Kamal Adwan Hospital, suffering moderate injuries.

The two suffered various cuts and bruises, especially the faces and upper body.

The army also fired a missile targeting a water tank and an empty land, in Beit Hanoun, causing damage.

The Israeli army said a shell was fired from Gaza into Sderot town, in the Negev, causing property damage.

The Israeli Air Force fired missiles into a center run by the al-Qassam Brigades, the armed wing of Hamas, while the army fired a missile into another target.