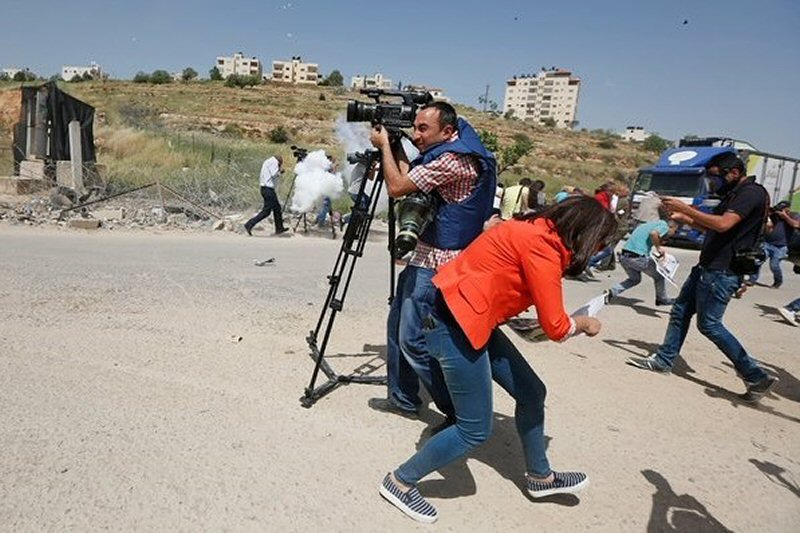 As local and international criticism continued to mount against the Ramallah-based Palestinian Authority’s (PA) tightening noose on freedoms of expression in the occupied West Bank, seven Palestinian journalists imprisoned by the PA have begun a hunger strike after being detained under the controversial Cyber Crimes Law, approved by Palestinian President Mahmoud Abbas last month.

Palestinian journalists Mamduh Hamamra, a correspondent for Al-Quds News, Al-Aqsa TV correspondent Tariq Abu Zeid, and freelance journalist Qutaiba Qassem all declared a hunger strike immediately after their detentions were extended by up to 15 days on Thursday, according to a statement released by Omar Nazzal, a member of the Palestinian Journalists’ Syndicate and former prisoner of Israel.

The journalists had all been detained several days prior for allegedly violating the terms of the new law, according to Abdin.

All seven of the journalists reportedly work for media outlets that were among 30 sites blocked by the PA in June — all of which were reportedly affiliated with the Hamas movement, the ruling party in the besieged Gaza Strip which has been embroiled in a bitter ten-year rivalry with the Fateh-led PA, or Abbas’ longtime political rival, Muhammad Dahlan.

While the move to block the websites in the West Bank was condemned at the time as an unprecedented violation of press freedoms in the Palestinian territory, Abbas took the crackdown on media to another level last month by passing the Cyber Crimes Law by presidential decree.

In a statement on Thursday, Nazzal said that at least six of the imprisoned journalists — omitting al-Fakhouri — were being detained over allegations of violating Article 20 of the Cyber Crimes Law.

The article states that an individual could face at least one year in prison or be fined at least $1,410 for “creating or managing a website or an information technology platform that would endanger the integrity of the Palestinian state, the public order, or the internal or external security of the State.”

Meanwhile, “any person who propagates the kinds of news mentioned above by any means, including broadcasting or publishing them” faces up to one year in prison or a fine ranging from $282 to $1,410, according to the new law.

Abdin said that these “loose articles,” through which individuals would face imprisonment simply for publishing certain articles on their social media accounts, set the groundwork for arresting Palestinian journalists and “destroying the freedom of journalism work in Palestine.”

Nadim Nashif, the cofounder and director of Palestinian and Arab digital advocacy group 7amleh, called the law “terrible” and “draconian.”

“It’s the worst law in the PA’s history,” Nashif said. “It allows the PA to arrest anyone under unclear definitions.”

Nashif noted that not only did the law criminalize the creation, publication, and propagation of certain information deemed dangerous by the PA, it also ruled that individuals found to have bypassed PA blocks on websites through proxy servers or Virtual Private Networks (VPNs) could face three-month prison sentences.

Nashif said that the law had dragged the West Bank “backwards.”

Despite Israel’s decade-long occupation of the West Bank and the more than 10-year political split with Hamas, “generally, the media and websites were left alone,” Nashif said. “They were not part of this political fight.”

“The PA is kind of breaking the last spaces of freedom of speech,” he said.

Rights groups were quick to condemn the detention of the journalists, claiming that the new law was aimed at rooting out political dissent against Abbas and the PA — likely under the auspices of the PA’s widely condemned security coordination with the Israeli state, although the PA has repeatedly stated that it has halted this policy since July.

According to prisoners’ rights group Addameer, a PA security official had initially said that at least five of the imprisoned journalists were arrested for “leaking information and communicating with hostile parties.”

However, Addameer added, the Palestinian Journalists’ Syndicate contacted Palestinian security forces on Wednesday morning and were told that the journalists were detained “in order to pressure Hamas to release another journalist detained in the Gaza Strip,” referring to Fouad Jaradeh, a correspondent for official PA news channel Palestine TV who has been imprisoned in Gaza for more than two months.

Both Hamas and the PA have been criticized for carrying out retaliatory acts on individuals affiliated with the opposing group, most notably in the shape of politically motivated arrests and imprisonment.

Abdin said that Palestinian journalists have been “plunged into the Hamas-Fateh division,” as both groups have targeted journalists in order to quash opposition that could affect their political hold in the Gaza Strip and the West Bank respectively.

The Palestinian Center for Development and Media Freedoms (MADA) said in a statement on Wednesday that the journalists’ arrests were “part of a marked escalation of violations against media freedoms” in both the West Bank and Gaza.

However, the new law and Abbas’ moves to stifle dissent against the PA are “not just problematic for journalists,” Nashif said. “Any activist or individual who the PA thinks is an opponent can now be arrested without any clear reason.”

The PA has also been accused of conducting sweeping detention campaigns targeting Hamas-affiliated residents of the West Bank, while the PA has escalated measures in recent months to pressure Hamas to relinquish control of the Gaza Strip.

A study by Palestinian think tank al-Shabaka documented the consequences of the PA’s security campaigns, “whose ostensible purpose were to establish law and order,” but have been perceived by locals as criminalizing resistance against Israel.

Abdin pointed out that both the website blocking and the new cyber crimes law violated Article 27 of Palestinian Basic Law, which protects the press freedoms of Palestinian citizens, including their right to establish, print, publish, and distribute all forms of media. The law also guarantees protections for citizens who are working within the field of journalism.

The article also prohibits censorship of the media, stating that “no warning, suspension, confiscation, cancellation, or restriction shall be imposed upon the media,” unless a law violating these terms passed a legal ruling.

Abbas, however, has not received permission from the judiciary to approve these far-reaching restrictions on the press, according to Abdin.

Since Hamas won parliamentary elections in 2006, the Palestinian Legislative Council has not convened in Ramallah, meaning that the vast majority of laws passed by the PA in the past ten years have been passed by Abbas, who extended his presidency indefinitely in 2009, via presidential decrees.

Al-Haq has pointed out that the new legislation violates international law, including Article 19 of the International Covenant on Civil and Political Rights (ICCPR).