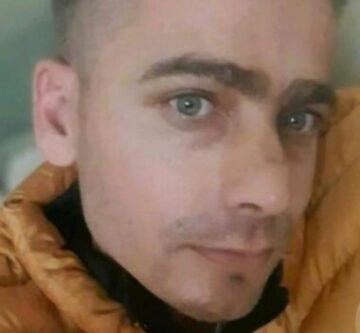 A paramilitary illegal Israeli colonialist settler shot and killed, in the early morning hours Friday, a Palestinian man near the central West Bank city of Ramallah.

According to the Israeli military, the man, who was unarmed, attempted to break into a home in the illegal Sadeh Ephraim colony, which was installed on privately-owned Palestinian lands.

The army also claimed that, at about 3:45 at dawn, the Palestinian drove his car fast through a field, and stopped in front of a house at the edge of the colony, and allegedly tried to enter through a locked door.

It added that a guard woke up and began a physical confrontation with the man before another guard shot and killed him.

Radi Abu Fkheitha, the head of Ras Karkar Village Council, said the army informed the family Khaled Maher Nofal, 34, that he was shot and killed, and accompanied his father, Maher, and his brother, Mohammad, to the scene to identify him and his bloody clothes. It is worth mentioning that Khaled is a married father of a boy, only four years of age, and works at the Palestinian Finance Ministry.

He was near the ar-Reesan Mountain, which was recently illegally confiscated by Israeli colonists who established the Sde Ephraim colony on the stolen Palestinian lands.

After the man was shot, Palestinian medics rushed to the area, but the soldiers prevented them from reaching him, and took his corpse away.

His family denied the Israeli allegations, and said that the guard or the soldiers did not have to deliver fatal shots, especially since he was unarmed, and could have been easily arrested.

They added that their son was executed in cold blood, and that the soldiers confiscated his car, in addition to invading and ransacking the family’s home and interrogated them.

“He just went to check on his land in the ar-Reesan Mountain where Israeli has been trying to illegally annex the lands of the Palestinians in the area for its colonialist activities,” the family stated, “He owns dozens of Dunams of lands there.”