Palestinian Loses Consciousness After Israeli Soldiers Assaulted Him In Jerusalem 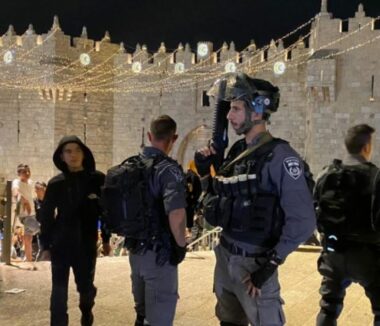 Israeli soldiers injured, on Sunday night after midnight, a Palestinian man after constantly assaulting him in Bab al-‘Amoud area, in occupied Jerusalem, and attacked medics who tried to help him.

Eyewitnesses said the soldiers assaulted the young man, by repeatedly striking him on several parts of his body, including his head, while trying to abduct him.

They added that the man fainted and fell onto the ground before the soldiers assaulted several Palestinian medics who tried to provide him with the needed first aid.

The Palestinian medics were eventually able to reach the injured young man and provided him with the needed medical attention before the soldiers abducted him.

Also in Jerusalem, the soldiers and police officers attacked dozens of Palestinians, who were protesting an Israeli ruling forcibly removing Palestinians from their homes in Sheikh Jarrah.

On Saturday afternoon, Israeli soldiers and police officers assaulted many Palestinian Christians celebrating Holy Saturday, abducted two of them, and installed roadblocks preventing many from reaching the church of the Holy Sepulcher.

It is worth mentioning that the Israeli escalation started on the first day of the holy Muslim month of Ramadan, especially in the courtyard of Al-Aqsa Mosque, Bab al-‘Amoud, and several neighborhoods in the Old City, before the army was forced to remove its barriers in areas leading to Al-Aqsa, a week ago.

However, even after the removal of the barricades, the soldiers continued to attack the Palestinians to prevent them from gathering and suiting in Bab al-‘Amoud, in addition to other nearby areas.

The Israeli violations led to dozens of injuries, including those who were assaulted by illegal colonialist settlers, in addition to the abduction and detention of scores of Palestinians.