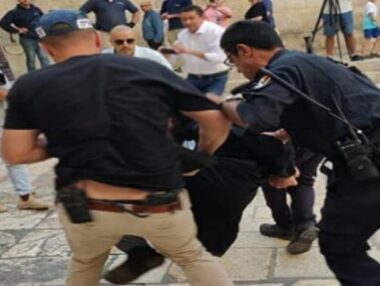 In its statement, the ministry described the attack as a flagrant violation of religious freedoms and the freedom to access all holy sites.

It added that such an attack reflects the prevalence of hatred, extremism, and racism in the institutions, including the police, of the occupying power [Israel].

The Ministry also called on the International Community to provide the needed protection to Islamic and Christian holy sites in Palestine, and the Palestinian people living under Israeli occupation and subject to various forms of violations, assaults, and crimes.

Eyewitnesses said the soldiers also assaulted two young Palestinian men, celebrating Holy Saturday with their families, near the church and abducted them. On its part, the Jordanian Ministry of Foreign Affairs and Expatriates also denounced the attack and the harassment targeting Palestinian Christians near the Church of the Holy Sepulcher in Jerusalem and demanded Israel to respect religious freedoms, and to stop its violations, against the Palestinian Muslims and Christians in the occupied holy city.

It is worth mentioning that Sunday marks easter for Orthodox Christians.