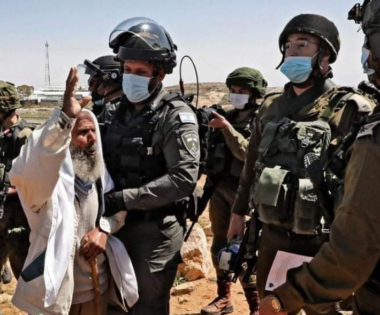 Israeli soldiers attacked, Friday, dozens of nonviolent Palestinian protesters, including elders, in the Ein al-Baida area, where the army is trying to illegally annex Palestinian lands, southeast of Yatta town, south of the southern West Bank city of Hebron.

Fuad al-‘Amour, the coordinator of the Protection and Steadfastness Committees in southern Hebron, said dozens of Palestinians performed noon prayers on their threatened lands, where the illegal Israel colonialist settlers are planning to build barns and farms for their livestock, near Ma’on and Karmiel colonies, built on stolen Palestinian lands.

Al-‘Amour added that the protesters carried Palestinian flags and chanted for ending the illegal Israeli occupations, its colonies, and escalating violations.

The Palestinians also planted olive saplings on their lands before the soldiers assaulted them, in addition to harassing them and hurling insults at them.

It is worth mentioning that the procession was attended by many international peace activists.