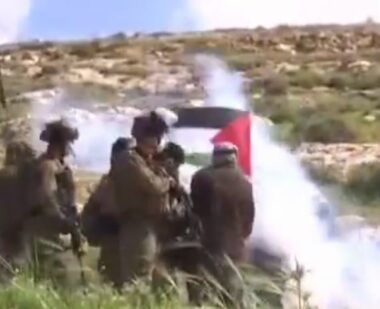 Israeli soldiers injured, Friday, four Palestinians and caused dozens to suffer the effects of tear gas inhalation, during the weekly nonviolent procession against the illegal takeover of Palestinian lands, near the northern West Bank city of Nablus, for the benefit of Israel’s colonies.

Local sources said dozens of Palestinians marched from the center of Beit Dajan village, east of Nablus while chanting against the ongoing illegal Israeli occupation, its colonies, and constant violations. They added that the soldiers resorted to the excessive use of force against the nonviolent protesters, and fired live rounds, rubber-coated steel bullets, gas bombs, and concussion grenades at them.

Media sources said the soldiers shot one Palestinian with a live round in his leg, three with rubber-coated steel bullets, and caused dozens to suffer the effects of tear gas inhalation.