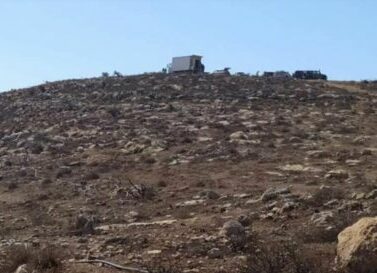 Many Israeli colonists, illegally squatting on Palestinian lands east of Beit Dajan village, east of the northern West Bank city of Nablus, installed an outpost and a barn on private lands owned by the villagers.

Nasr Abu Jaish, a member of the Political Bureau of the leftist Palestinian People’s Party (PPP), has reported that the colonists installed the outpost just five kilometers east of the village, in the Thohour al-Masyef area, privately-owned by the villagers.

He added that the colonists brought hundreds of livestock, and extended water pipelines to the new outpost with water from Elon Moreh illegal colony, which was built on stolen Palestinian lands.

Abu Jaish also said that the colonists started preparing for a new road which would extend for several kilometers on Palestinian lands and leading to their illegal annexation.

He said that the Palestinians will not stand idly by while the colonists continue the theft of their lands under the protection of the illegal Israeli occupation and its military.

In related news, many colonists invaded a Palestinian land in the Birin area, northeast of Yatta town, south of the southern West Bank city of Hebron, and installed a tent before raising the Israeli flag on the land.

The land is owned by Palestinians from the Burqan family and is subject to constant violations as the colonists and the soldiers.

Israel’s colonies in the West Bank, including those in and around occupied East Jerusalem, are illegal under International Law, the Fourth Geneva Convention in addition to various United Nations resolutions.