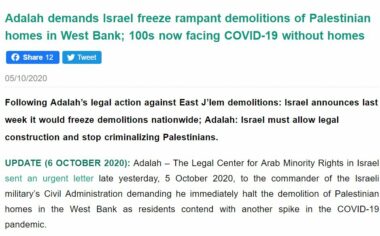 UPDATE (6 OCTOBER 2020): Adalah – The Legal Center for Arab Minority Rights in Israel sent an urgent letter late yesterday, 5 October 2020, to the commander of the Israeli military’s Civil Administration demanding he immediately halts the demolition of Palestinian homes in the West Bank as residents contend with another spike in the COVID-19 pandemic.

According to the United Nations Office for the Coordination of Humanitarian Affairs (OCHA), the period from March to September 2020 saw the demolition or confiscation of 370 Palestinian-owned structures in the West Bank. This marked the highest average monthly demolition rate in four years.

Israel’s intolerable policy is a direct violation of international law. Jamie McGoldrick, deputy special coordinator for the Middle East peace process and UN resident coordinator and humanitarian coordinator for the Occupied Palestinian Territory also warned that “the demolition of essential structures during the time of the COVID-19 pandemic is particularly worrying as it further compounds the overall situation in the West Bank.”

In addition to homes, Israeli demolitions also targeted Palestinian properties including water, hygiene and sanitation assets, and structures used for agriculture, undermining the access of many to livelihoods and services. Moreover, 50 of the structures had been given to Palestinians as humanitarian aid, and their destruction hit the most vulnerable of all, undermining essential emergency operations.

The COVID-19 pandemic and the additional restrictions placed on Palestinian residents of the West Bank also makes it significantly more difficult – both practically and economically – for those whose homes have been demolished to secure legal defense.

“In the current global reality brimming with fear and near-constant uncertainty, it is most unfortunate that Israel finds it appropriate to add to people’s pain and suffering by illegally demolishing their homes, livelihoods, and essential infrastructures. Israel’s demolitions amplify the vulnerability of Palestinians seeking to contend with the COVID-19 pandemic while under occupation. We demand Israel immediately halt its demolition of Palestinian homes in the West Bank.”

In response to legal action taken by Adalah, Israeli authorities clarified on 1 October 2020 that the state is freezing home demolitions across the country, as was the case during the first wave of the COVID-19 crisis.

On 17 August 17 2020, Adalah Attorney Suhad Bishara, in coordination with the Civic Coalition for Palestinian Rights in Jerusalem, sent a letter to Israeli Attorney General Avichai Mandelblit and other state officials demanding they bring an immediate halt to Israel’s accelerated policy of home demolitions in Palestinian neighborhoods of occupied East Jerusalem.

Israel had amped up its demolitions of Palestinian homes in the city after COVID-19 morbidity rates dropped during the summer months.

According to a report by the United Nations Office for the Coordination of Humanitarian Affairs (OCHA), Israel demolished 31 buildings in East Jerusalem in July and August, leaving about 96 people homeless.

As of August, and since the beginning of 2020, Israel has demolished 112 Palestinian buildings and 261 people were left homeless as a result, including countless children. An additional 467 Palestinian residents were harmed as a result of partial demolitions of structures by Israeli authorities.

“After re-examining things – and given the restrictions recently imposed by the government following the further spread of COVID-19 –it has been decided at this stage, to adjust the enforcement policy of planning and construction offenses to align with the state of emergency, similar to the policy decided upon in March 2020.”

The AG’s office further added that the new policy would be examined later, in accordance with the government’s evolving COVID-19 emergency policies.

Israeli authorities’ released details regarding the new policy include:

Israeli authorities also noted that “due to the state of emergency, the National Unit for the Enforcement of Planning and Construction Law will reduce its friction with the population” but they also made clear that enforcement in relation to new construction-related offenses would continue.

“Although Israel’s halt of its demolition of Palestinian homes in East Jerusalem is an immediate necessary step, it should not be conditional on restrictions imposed by the government in response to COVID-19. As long as we are facing this emergency, the freeze on home demolitions must remain in force. Within the wider context, Israel must end its restrictive measures imposed to prevent the development of Palestinian residential areas in illegally-annexed East Jerusalem and refrain from criminalizing and penalizing those forced to build or expand their homes without permits.” 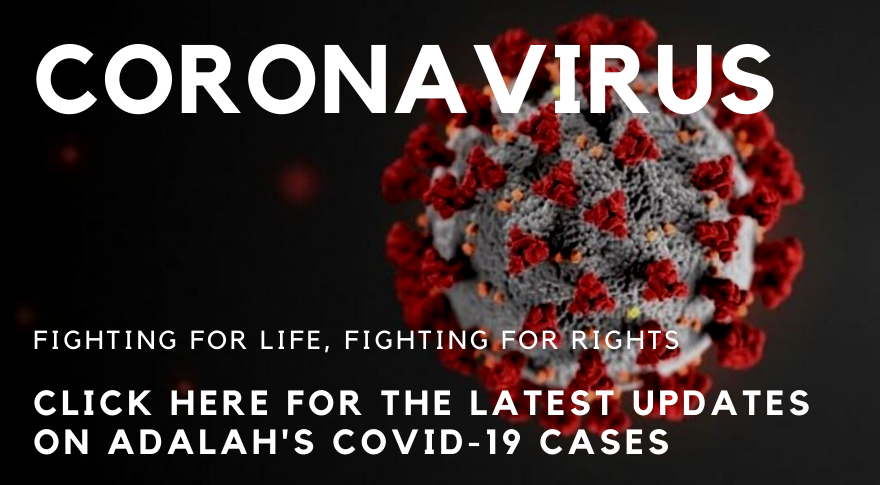