Palestinian Loses Eyesight After Hamas Interrogators Tortured Him In Gaza 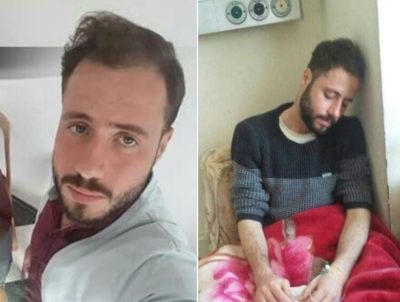 A young Palestinian man who suffered from neurological disorders in his eyes impacting his vision, has completely lost eyesight after Hamas interrogators tortured him, and struck him on the head.

The Palestinian, identified as Ahmad Safi, was supposed to undergo a surgery in Egypt, and told Hamas security forces about his scheduled procedure, but they ignored his pleas, his family stated.

His brother, Mohammad, said that Ahmad was summoned for interrogation at the Internal Security headquarters, in northern Gaza, for his role in the peaceful movement known as “We Want to Live”, protesting Hamas violations and poverty in the coastal region.

He added that the Hamas-run security forces in Gaza were informed about his brother’s medical condition, and about his scheduled surgery, but they insisted on interrogating him.

According to Mohammad, his brother was beaten and tortured, and that he informed the interrogators that he lost sight in one of his eyes, and that is when the interrogator beat him on the head three times and said, “this is to make sure you never will see ever again.”

Mohammad was later released and was rushed to the Shifa Medical Center in Gaza city. He is now completely blind, and it remains unknown whether he will ever be able to see again.