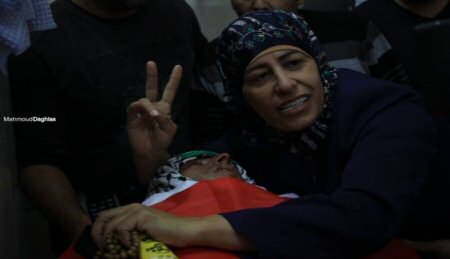 During their detention, Rusaila Shamasneh conducted a hunger strike for 17 days against her forcible separation from her young daughter until she and Sara were sentenced to 40 days in prison on Monday, 20 February. Both Shamasneh and Sara were accused of “incitement” for their statements at the funeral of their son and brother over two years ago; Rusaila was also accused of firing a gun into the air. Mohammed participated in an armed resistance operation in which he seized a gun of an Israeli occupation soldier. Sara was only 12 years old at the time.

Nevertheless, over two years later, occupation forces invaded their home and seized mother and daughter. Rusaila Shamasneh’s hunger strike served as a strong mechanism of pressure on the Israeli occupation, continuing until their sentencing. Their lawyer then appealed for their early release, which is being implemented today.