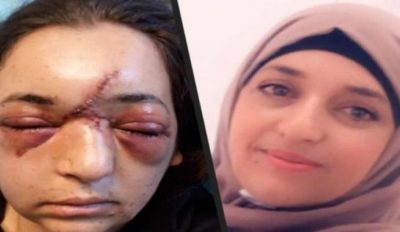 A Palestinian mother, from occupied Jerusalem, who was brutally assaulted by Israeli border police with a rifle butt in the face, tells her story, Quds News Network reported.

Rina Darbas, 36, said the incident took place six weeks ago, when she tried to protect her son and keep him from being arrested by the police in al-‘Isawiya neighborhood.

The Israeli police held her 14-year-old son, demanding to check his shirt and shoes to see if they matched the description of a person suspected of throwing rocks at them, despite an officer stating that the child was not the young man they were looking for.

The police had put the child in their patrol car anyway.

According to Darbas, she tried to pull her son, to no avail, and when she tried to speak to one of the officers in the patrol car, he forcefully hit her with the butt end of his rifle, making her lose consciousness.

Darbas consequently underwent a complicated surgery to implant a metal plate in her skull, and will need plastic surgery as well.

“Every time she looks in the mirror, she starts to cry,” said her husband, Karim Darbas.

Israeli police claimed that firebombs and rocks were hurled at the officers in al-‘Isawiya, and that Darbas fell victim to one of the stray stones.

Darbas’ son, suspected of throwing rocks, was released after four days in detention, no formal charges were submitted against him.

“The interrogator made it hard for me to explain what happened,” according to her deposition. “He asked for details about the soldier and asked me to draw a picture of the weapon. How would I know to do such a thing? He tried to put words in my mouth, to get me to say that I was hit by a rock, and he even tried to convince me that the soldier had hit me by accident when he raised his arm with the rifle to protect me from a rock that was thrown at me. I told him there was no rock-throwing going on there.”

The Border Police commented that “It emerges that during the weekend in question, 24 firebombs as well as fireworks and rocks were thrown at police forces at the scene in question, which is apparently how the local resident was hurt.”