Palestinian Officials Call Out US Ambassador over Doctored Photo of Jerusalem 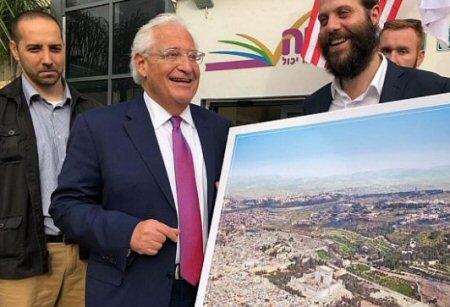 Palestinian officials are condemning the “despicable actions” of the US Ambassador to Israel, David Friedman, who was recently photographed while receiving a poster depicting an aerial image of occupied East Jerusalem, in which the Al-Aqsa Mosque and Dome of the Rock have been erased and replaced by a simulation of the Jewish Third Temple.

The photo shows a smiling Friedman — who is a vocal supporter of Israel’s illegal settlement enterprise — posing next to the poster during a visit to the Israeli city of Bnei Brak.

The photo of Friedman sparked widespread controversy, forcing the US Embassy in Israel to issue a statement claiming that Friedman “was not aware of the image thrust in front of him when the photo was taken. He was deeply disappointed that anyone would take advantage of his visit to Bnei Brak to create controversy.”

Secretary-General of the Palestinian Liberation Organization (PLO), Saeb Erekat, released a statement in reaction to the photo, asking “how long would these despicable US actions remain without being faced by an Arab and Islamic response.”

He said, according to Ma;an News Agency, that for the US ambassador to accept such a picture with a smile “indicates approval and recognition,” adding that “they are actually turning the conflict into a religious one.”

Meanwhile, Arab member of the Knesset, Ahmad Tibi, commented saying “this madman wants to make peace, good thing you did not move the embassy there!”

Mahmoud Al-Habash, a senior adviser to Palestinian President Mahmoud Abbas,slammed Friedman for posing with the doctored image, saying “the end result these criminals seek—and among them the terrorist settler David Friedman—is the erasure of the Palestinians from Jerusalem and their banishment from it.”

“Friedman’s appearance with a big photo of the Haram al-Sharif in which the Dome of the Rock was removed and the Temple was put in its place is a provocative move and a racist message that incites to the destruction of the al-Aqsa Mosque. This is a clear adoption of the radical Jews’ claims and beliefs about the al-Aqsa Mosque and the city of Jerusalem,” al-Habash said.

“Hiding the holy places to Islam in Jerusalem is the racist objective of extremist Jews, which is prevalent in the occupying state,” he continued.

He has been an open supporter of recognizing an undivided Jerusalem as Israel’s capital, which flies in the face of Palestinian aspirations centered on East Jerusalem becoming the capital of a future, independent Palestinian state — long considered the most viable solution for ending the conflict.

He has positioned himself as a divisive and controversial figure in Israeli-Palestinian politics, accusing former US President Barack Obama of being an “anti-Semite” and comparing American Jews who oppose the half-century occupation of the West Bank, including East Jerusalem, to prisoners who served as guards in Nazi concentration camps.

Friedman also serves as president of the American Friends in Beit El Yeshiva — a nonprofit group that supports the illegal settlement of Beit El near Ramallah in the occupied West Bank. His name appears on several buildings in the settlement that he had directly funded with his organization.

Palestinians have long feared that Israel has been attempting to shake up the status quo at the holy site, in the shape of routine Jewish incursions on the site and right-wing Israeli calls to demolish the mosque and replace it with a third Jewish temple.