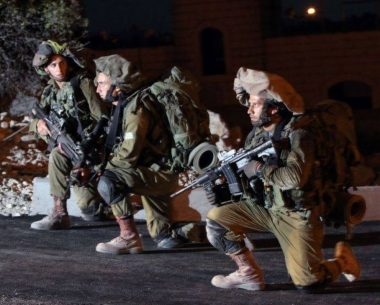 Israeli soldiers abducted, on Thursday at dawn, four Palestinians, from their homes in Nablus and Hebron, in the northern and southern parts of the occupied West Bank. The army also invaded stores near Bethlehem and examined surveillance recordings.

The Nablus office of the Palestinian Prisoners’ Society (PPS) said the soldiers invaded many areas in the city, searched several homes and abducted Abdul-Rahman Talal Haroun, 21, in addition to Abdul-Karim al-‘Albi, from Khallet al- ‘Amoud area.

The undercover soldiers abducted Mohammad from a meet shop, and took him to the military tower, at the main entrance of the town, before handing him to the regular army units.

Furthermore, the soldiers broke into many shops in Doha town, west of Bethlehem, violently searched them, and examined surveillance recordings, especially near the Industrial Zone.